If you do not ask the right questions, you do not get the right answers. A question asked in the right way often points to its own answer.
– Edward Hodnett 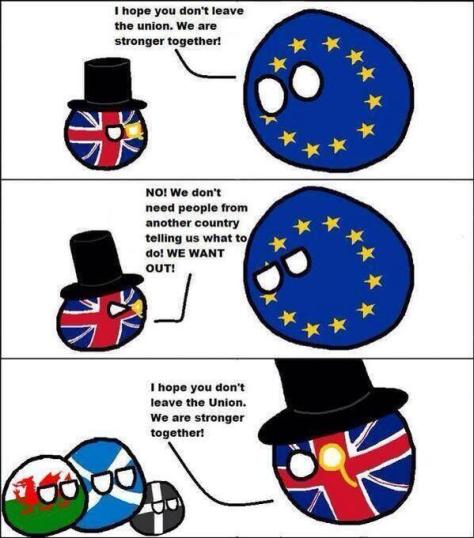 The 23rd of June 2016 is the date of the United Kingdom’s vote on whether it should remain part of, or leave, the European Union. It takes place a mere 49 days after the Scottish Parliament elections, the Welsh Assembly elections, and the English Local elections.

It is a question that is largely irrelevant to the Scottish Parliament elections, for every major party – be it by vote share or proportion of representation in Holyrood – is pretty resoundingly in favour of continued EU membership. While the Eurosceptic Party is the third largest by votes in England, it barely registers in the single digits in Scotland:

Already questions are flying. But they’re never the right questions. They’re questions about which Etonian or Shenfieldian will hunker in or flounce out of the EU Closet; about which of the many grotesque personalities will lead the campaigns; about things the EU doesn’t have power over, but certain individuals pretend that it does; about supposed hypocrisy on those wanting to remain in the EU yet leave the UK; about how Scots have to choose between Westminster rule and Brussels rule as if the two are remotely comparable. And, most important of all is the central question itself. The wording of the referendum question is crucial::

Unfortunately, variations on the two choices –  “Stay/Leave,” “In/Out,” “Yes/No,” and so forth – are all over the place. It’s almost as if having a rushed, haphazard, half-hearted campaign that barely lasts half a year would cause confusion like this. There are plenty of Scottish independence supporters who are as opposed to the EU as they are to the UK. Yet the question is not “should Scotland remain a member of the European Union or Leave the European Union” – it is about the United Kingdom. When you go into the polling station, you’re not asking to vote on what a sovereign, independent Scotland should do in regards to the EU – because we are not yet a sovereign, independent nation.

Our electorate only makes up 8.7% of the UK’s 44.7 million voters: with Wales and Northern Ireland, it’s 16.4%. England houses 83.6% of the entire UK electorate – and outside of an extremely close contest, it’s those 37.4 million voters who will decide what the UK does. If we assume that every single voter registered in 2015 went on to vote, and 60% of English voters chose to leave, then the UK could leave the EU even if every single voter in Scotland, Wales and Northern Ireland voted to remain.* As Doug Daniel points out, the central problem of this referendum always comes back to the profound democratic deficit in this supposed family of nations:

This referendum is not about Scotland, Wales or Northern Ireland – if it was, it wouldn’t be getting held so soon after our national elections. Not only does it risk overshadowing them massively in terms of media coverage (and artificially inflating UKIP’s electoral fortunes), but having just spent the last four months fighting elections, Scottish, Welsh and Northern Irish parties won’t have the resources – human or financial – to fight another six-week campaign, especially one that many of us aren’t even particularly interested in.

But then, the very existence of this referendum is proof that Westminster doesn’t care about Scotland (or the other devolved nations). The EU referendum is about England, and England alone.

There are arguments for and against the EU from a Scottish perspective – be it farmers who depend on CAP payments (albeit the lowest in the EU, thanks to the UK government), or Scottish fishermen railing against EU fishing policy – but these are not the arguments that will be heard in the media. It’s going to be about one thing, and one thing alone, and we all know what it is, because we’ve seen it being discussed on BBC Question Time every single week for the last 150 years or so: immigration.

The only way to make this referendum relevant to Scotland is by looking at how it can help the cause of Scottish independence, and there are only two ways we can do this, and both of them involve voting to remain in the EU. 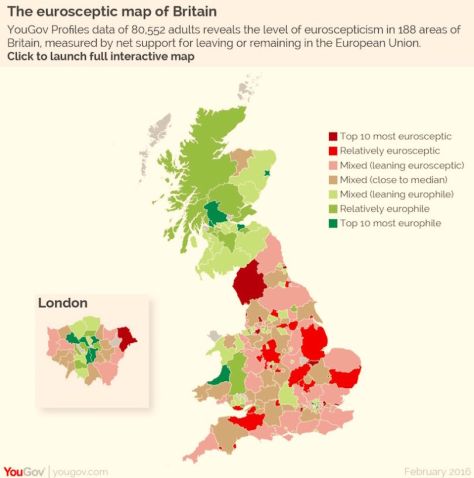 While there were not enough respondents from Inverclyde for YouGov’s Eurosceptic Map of Britain, it seems pretty reasonable to presume that we are similar to our nearest neighbours (at least Mixed (leaning europhile) like North Ayrshire, or Relatively Europhile like Renfrewshire), since we don’t have the fisheries issue that makes Moray so comparatively Eurosceptic compared to the rest of Scotland

At the risk of redundancy, I’d like to go further. As far as I’m concerned, this vote is a choice over which matters more to you = Scottish independence from the UK, or Scottish independence from the EU. Already, plenty are suggesting that the SNP & Nicola Sturgeon really want the UK to vote out, so that the in-voting Scots would be galvanised for a second referendum:

Now why would Sturgeon want to highlight weaknesses in a campaign she says she supports? Could it be because she really wants the UK to leave, setting up (maybe) another Scottish independence referendum? Not that, surely?
– Michael White, he of the infamous whiskers, doesn’t seem to understand the difference between a campaign and a cause

Evidently they’re trying the “but Sturgeon REALLY wants the Tories to win, you guys, even though she says she totally doesn’t” tactic again – and it’ll probably be just as successful. I don’t think it washes for two reasons. The first is about timing:

Could it happen practically? Well I think the answer to that is yes as well. Why? Because… if the UK votes out there’s a two-year period under the Lisbon treaty. And what would happen then is Scotland would negotiate its position, and effectively Scotland would just stay in, and the rest of the UK would move out. So I think it’s a yes to both questions.
– Alex Salmond, SNP foreign affairs spokesman

If we presume that the UK does leave the EU within two years, then Scotland has an even shorter period to transition between a UK constituent and EU member in its own right. The White Paper claimed a period of 18 months between the referendum and March 2016 to transition into independence. This means that the Scottish government would have at least 6 months after a Brexit vote to hold a second referendum, and just over 7 months after the Scottish parliament elections. The Scottish people would then have two crucial referendums and an election in a single year. The alternative is delaying indyref 2, and running the risk of breaking continuity with EU membership – again, if the UK government negotiates to leave within two years.

It’s a tight spot: does the Scottish government rush a second independence referendum in January 2017 so as to ensure uninterrupted EU membership for the people, or do they hope the rUK takes its time to sort things out and hope to build enough sustained support for independence? I find it difficult to believe the UK public, having voted out, would stomach staying in the EU any longer than they had to. Given the choice between setting the timescale for a referendum for an appropriate and accommodating timeframe, and being essentially forced into an extremely short campaign period, I know what I’d prefer.

The second reason is about the very soul of the Scottish independence movement – hope over fear. Let’s say it all comes to pass: Scotland votes remain while England votes leave; a mandate for a second referendum is sought and passed; the result is a Yes vote, and Scotland’s membership of the EU continues as an independent nation while the rUK leaves. What’s the problem? The problem is that the people of Scotland chose to be independent not from a reborn sense of confidence and assurance, but because of a wrong done to them – being dragged from the EU against their wishes – and the fear and uncertainty such an action has done to them. The fear of leaving the EU may be enough to outweigh the fear of leaving the UK for those soft No voters. Isn’t that to be expected, given how enthusiastically and vigorously Better Together proclaimed that only remaining in the UK could guarantee Scots’ place in the EU?

Would I still take it? Of course I would. If this scenario causes the surge in support for independence needed to justify and win a second referendum, as polls have suggested, then we must make it work for us. But I could not help feeling cheated – cheated of a chance to rebuild an ancient nation not from anxiety over being isolated from our neighbours, but to shake off centuries of cringe and self-doubt to reassert our status as a polity, a country, a people. A referendum triggered by a Brexit would mean that our independence was made into a choice between two uncertain futures, where we would be forced to choose between two unions. How much better would it be for us to make the choice for ourselves, rather than be forced into it?

So no, I don’t believe Nicola Sturgeon, or anyone in the SNP, is being disingenuous when they announce their support for remaining part of the European Union. A Leave vote would surely hasten a second referendum, but it might not be the same campaign of optimism and self-belief and excitement of the 2014 referendum – it could have a completely different tone. One that neither Yes nor No campaigners would like. When Scotland becomes a nation again, I want it to be because the people of Scotland want it – not because they felt they had no choice. I don’t want a nation of heavy hearts voting to leave the UK as the least terrible option.

I want Scotland’s independence to be a proud, confident stride into the sunlight – not lurching onto the land, gasping desperately for air, after your ship was dashed against the rocks. A Leave vote won’t make a positive indyref2 impossible – but it will make it more difficult to navigate in the short timeframe which seems most likely. Make no mistake: I’m up for the challenge, whichever way it comes to us. It’s up to the people of Scotland – and, indeed, England – whether they want to do this fast, or do this fair.

There are no right answers to wrong questions. – Ursula K Le Guin

7 thoughts on “There Are No Right Answers To Wrong Questions”