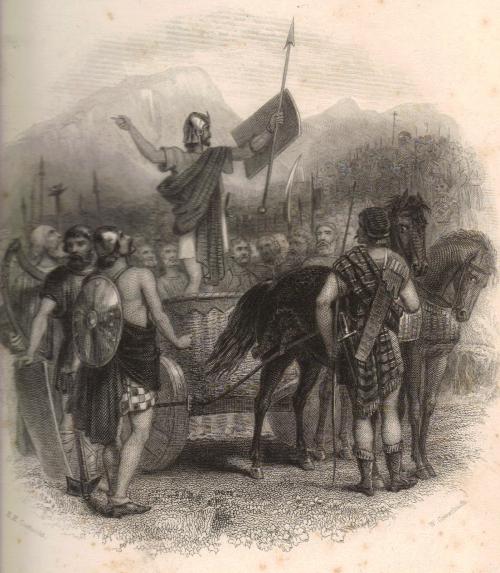 Whenever I consider the origin of this war and the necessities of our position, I have a sure confidence that this day, and this union of yours, will be the beginning of freedom to the whole of Britain. To all of us slavery is a thing unknown; there are no lands beyond us, and even the sea is not safe, menaced as we are by a Roman fleet. And thus in war and battle, in which the brave find glory, even the coward will find safety. Former contests, in which, with varying fortune, the Romans were resisted, still left in us a last hope of succour, inasmuch as being the most renowned nation of Britain, dwelling in the very heart of the country, and out of sight of the shores of the conquered, we could keep even our eyes unpolluted by the contagion of slavery. To us who dwell on the uttermost confines of the earth and of freedom, this remote sanctuary of Britain’s glory has up to this time been a defence. Now, however, the furthest limits of Britain are thrown open, and the unknown always passes for the marvellous. But there are no tribes beyond us, nothing indeed but waves and rocks, and the yet more terrible Romans, from whose oppression escape is vainly sought by obedience and submission. Robbers of the world, having by their universal plunder exhausted the land, they rifle the deep. If the enemy be rich, they are rapacious; if he be poor, they lust for dominion; neither the east nor the west has been able to satisfy them. Alone among men they covet with equal eagerness poverty and riches. To robbery, slaughter, plunder, they give the lying name of empire; they make a solitude and call it peace.
– Tacitus, Agricola

In the 8th decade of the Gregorian Calendar, the Roman Empire was approaching its greatest extent. The Sons of Romulus and Remus made the Mediterranean their lake. They had subdued the nations of Gaul, Iberia, Illyria, Mauretania, and Britannia. They toppled the heirs of Alexander’s empire. They crushed Carthage, the only city which could truly challenge the might of Rome, and razed it to the ground.

It seemed there would be no end to the empire – no limits. But after centuries of dominance, it seemed even Mars’ favoured could not conquer forever. They could not break the Parthians in the east; the barbarians north of the Rhine proved indomitable; the sands of the Sahara stopped even the legions. And north of their newest conquest, Britannia, was Caledonia.

The Romans tried in vain to conquer the wild Caledonii: of the 52,000 troops stationed in Britannia, no less than 28,000 of them were stationed in the border country north of Hadrian’s Wall, south of the Antonine. Dozens of forts, towers and camps stretched from the firths of the Clyde to the Forth, reaching north along the East Coast to Cawdor. Agricola took some land, and the Roman historians considered it all but victory. But the Caledonii were not to be tamed: even suffering a cataclysmic defeat of Mons Graupius, Caledonia would not fall to Rome. They raided, they skirmished, they sabotaged and destroyed, wrecking any chance of Rome gaining a footing. After twenty fruitless years, the Romans withdrew south of Hadrian’s Wall. A century after Agricola, Emperor Septimius Severus took 40,000 soldiers north once again in an attempt to finally take Caledonia – but while the brutal campaign sapped the Caledonians’ ability to raid the Roman Britons, neither Severus nor his son Caracalla succeeded, and Hadrian’s Wall became the final border. Caledonia was beyond the northernmost limit of Roman civilization.

Not all Romans shared a desire for conquest and domination. Tacitus attributed the above words to Calgacus, a possibly-invented leader of the Caledonii, which serves as a powerful indictment of the nature of empire which resonates to this day. That final phrase, “they make a solitude and call it peace,” is variously translated as wilderness, or desert. The 1820 Rising, led by the socialist revolutionary James Wilson, took it as a rallying cry for change – “Scotland Free or a Desert” emblazoned their flag. Wilson, along with other Scottish revolutionaries like John MacLean and Thomas Muir of Huntershill, were suppressed, charged with sedition for daring to challenge the established order, just as Calgacus and the Caledonians were trounced at Mons Graupius. But just as at Mons Graupius, even the most grievous of defeats could not crush the fire that burned in their hearts.

On the 18th of September, 2014, that fire continued unabated within the hearts of those who wish to see true socialist change in Scotland – a new country free from the tyranny of neoliberalism and feudal tradition. And all they had to do to get it is vote. No blood, no death, no sorrow – just scratch a piece of paper with a pencil. And the world would be changed.

The referendum saw a defeat for Yes – just like Mons Graupius was a defeat for the Caledonians. It was called crushing; decisive; devastating. Yet will this victory for Britain be ultimately as fruitless as Agricola’s? The referendum may not have recorded a vote for independence, but the change within Scotland shows that the desire for self-determination will not be so easily stopped. The people of Scotland have sovereignty – it is only a matter of time until they realise it. Then the new empire in Britain will recede back past the walls of their own making, and leave the wilderness to the people who call it home. 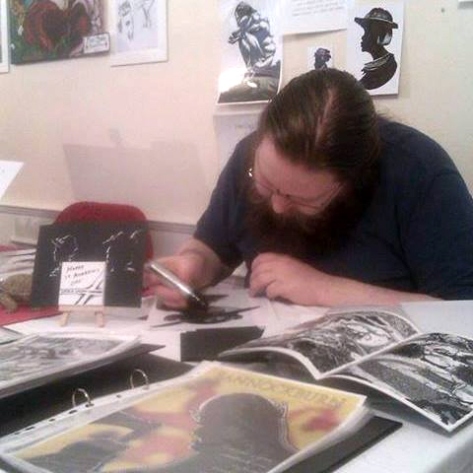 For a muckle great lad with a big black beard, he’s remarkably shy.

That’d be me, Al Harron. On the internet I go by the handle Taranaich. And I do indeed have a big black beard.

I’m an artist and writer by trade, most recently in the realm of comics: I’ve published a few small-press comics, contributed to a local press anthology, and I’m currently working on a graphic commemoration on the Battle of Bannockburn, which I’m hoping to have finished some time before the 800th anniversary. I was a member of the Robert E. Howard United Press Association for a few years, contributed to the award-winning fantasy scholarship blog The Cimmerian, and run The Blog That Time Forgot.

In the run-up to the independence referendum campaign, however, everything took a back seat to the most important poll in our country’s history. I started this blog specifically as a forum for my own political thoughts, as I was well aware of how temperamental politics can be in literary scholarship. The site’s views flourished in the final week, and continued to grow following the referendum and the 2015 General Election.

My politics are a bit all over the place, but there are some constants: generally I occupy the southwest quadrant of the political axis. I have voted SNP in every election since I was eligible (the 2003 Scottish election), though I only joined the party on the 20th of September 2014. I’m an active and enthusiastic participant in the Greenock & Inverclyde branch, and hope to continue the referendum’s success in fostering engagement, encouragement, and hope in the people of my home. I think Scotland should be an independent country.

As for other interests, I remain a great fan of Robert E. Howard and fellow adventure writers; maintain a lifelong interests in dinosaurs and other prehistoric life; listen to music as diverse as heavy metal and electronica; play games both board and video; and enjoy good science fiction, fantasy and horror of all media. I shook off the Scottish cringe and embraced my Caledonian quirks by learning the bagpipes, memorising Burns poetry, celebrating Scottish Gaelic, and finally got over the historical inaccuracies to see the appeal of Braveheart. I even recognise Roddy Piper, Connor and Duncan MacLeod, and Montgomery Scott as honorary countrymen.