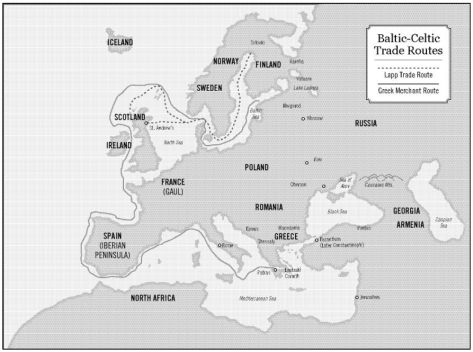 It’s often remarked how strange it is for Scotland’s patron saint not to be from Scotland (usually from folk who don’t know that much about patronage and saints). Not only that,  Scotland’s thousands of miles from Jerusalem: there’s no way could Andrew have even visited Scotland… is there?

The true nobility and merits of those princes and people are very remarkable, from this one consideration (though there were no other evidence for it) that the King of Kings, the Lord Jesus Christ, after His Passion and Resurrection, honoured them as it were the first (though living in the outmost ends of the earth) with a call to His most Holy Faith: Neither would our Saviour have them confirmed in the Christian Faith by any other instrument than His own first Apostle in calling (though in rank the second or third) St Andrew, the most worthy brother of the Blessed Peter, whom He would always have to be over us, as our patron or protector.
– The Declaration of Arbroath

The Declaration of Arbroath claims not only that Andrew is the patron of the Scots, but that he “confirmed” the Scots in the Christian Faith: this is reflected in a Medieval legend that St. Andrew himself converted the Scots to Christianity – which would present a bit of a problem, seeing as the Scots didn’t actually arrive in Caledonia until centuries later. Still, even if there was no Scotland for Andrew to visit, could Andrew have visited Caledonia? 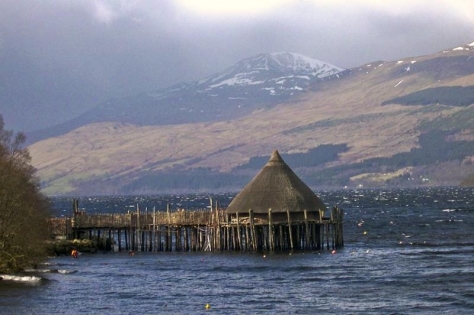 Travelling from the Levant to Caledonia is by no means an impossibility, and such distances are far from insurmountable to ancient travellers and explorers. The great Carthaginian explorer Himilco sailed the coast of Western Europe at least as far as Britannia in 500 BC. In 330 BC, the Greek adventurer Pytheas sailed from Thule (an ancient land in the far north variously identified as Scandinavia, the Faroe Islands, Iceland, or even Greenland) to Massalia (modern Marseilles) in only forty-five days. Ptolemy writes of Diogenes, who travelled from Alexandria to the marketplace of Rhapta, then on to the Mountains of the Moon – the Rwenzori Mountains in deep Africa; Himlco’s countryman Hanno the Navigator embarked on maritime voyages down the west coast of Africa; Demodamas‘ expeditions into Central Asia were the foundations of kingdoms; Eudoxus‘ attempted circumnavigation of Africa pre-dated those of Magellan & Elcano by millennia.

By the late 1st Century, the European trade routes were well-established and familiar to the Mediterranean realms: the Tin Trade from Antioch all the way to Cornwall was established by the Phoenicians a millennium before Andrew, and the Romans themselves were well aware of the British Isles. In addition to the Amber Road from the Sea of Azov to the Baltic, there were stops all along the northern coast to the North Sea. The people of Caledonia were far past the stone age, too: they were building crannogs, such as Loch Tay’s reconstruction (above); the famous Brochs, such as the well-preserved one at Mousa, were being built from 200BC to 200AD. 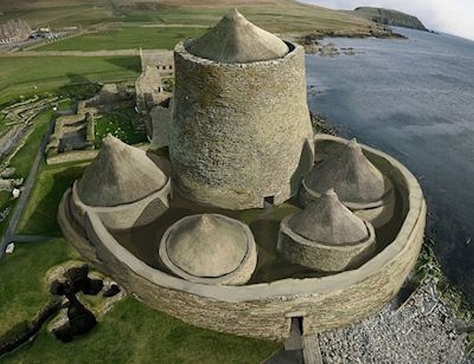 One other possible connection between Scotland and the Baltic is the mysterious “Seal People”:

It was believed at one time that the Finns frequently came over to Shetland taking the form of seals. In this connection a remarkable tale was told in Papa Stoor.

The islanders were often in the habit of visiting the outlying Vee Skerries for the purpose of hunting seals. On one occasion a man named Herman Perk, accompanied by others, left for the skerries in a small boat. When they arrived there Herman was landed on the rocks, but his companions remained in the boat to prevent it getting damaged. It happened, however, that a severe storm burst without warning, and the men found after several daring attempts, that it was quite impossible to get Herman off again. The storm was increasing in severity, and latterly they were compelled, for their own safety, to attempt getting back to Papa. After a terrible passage they succeeded in reaching the island, and their first act was to proceed to the home of their ill-fated companion to tell his folk what had befallen him. Imagine their surprise, however, on finding him comfortably seated at his fireside.

Herman had a strange story to tell them. Shortly after the boat left the skerries, he observed a large seal coming up, and as he watched its progress, it suddenly raised itself in the angry sea, and he became aware that it was speaking to him.

“Herman Perk,” it said, “you have destroyed many of our folks in your time, yet nevertheless if you will undertake to do me a service, I will carry you in safety to Papa tonight. Some time ago my wife Maryara was made captive in Papa. Her skin is now hanging in the skio (hut for drying fish) at Nortoos, and without it she cannot return with me to Finnmark [in northern Norway]. It is the third skin from the door, and I wish you to bring it to me.”

Herman had readily agreed to this proposition, whereupon he was told to cut two slits in the seal’s back as supports for his feet, and then place his arms firmly round the animal’s neck. The latter immediately took to the water, and in a remarkably short time Herman had the gratification of landing safely in Papa.

True to his promise, he went to the skio indicated, where he found the skin without any difficulty, and carried it down to the beach. The seal was waiting his coming, and at its side was the most beautiful woman he had ever beheld. The seal gave the skin to its lovely companion, and then apparently left its own body behind, and the happy pair immediately took their departure over the sea.

The following morning Herman went again to Nortoos. There, sure enough, lay the skin of a large seal, and it had two cuts behind the flippers. He placed it where he had taken the other from.

After that Herman was a prosperous man, but he was never known to visit the Vee Skerries again.

– John Nicolson, Some Folktales and Legends of Shetland

While the presence of “Finn-folk” in Shetlander & Orcadian legend may simply be carried over from their Nordic heritage (alternatively, it’d be fun to imagine Andrew meeting actual Selkies!) the isles were a Neolithic spiritual nexus that may have attracted pilgrims from beyond the British Isles – the Ness of Brodgar suggests that, far from Caledonia being on the periphery of the Ancient World, it was in fact a centre for pagan pilgrimage.  Stuart McHardy presents a very compelling case for exactly this in his book Scotland’s Future History, which I cannot recommend highly enough:

What the evidence does strongly suggest is that a sophisticated megalithic-building society formed in Scotland before 3000BC. The timescale of this society’s development is still a mystery, but it did not happen overnight and may well have its roots millennia earlier. After all, people had come north millennia earlier than that after the retreat of the ice, the earliest human artefacts found in Scotland having been dated to circa 12000BCE. This completely changed the Mediterranean-centric picture of prehistory that has effectively been Received Opinion in Europe for over a millennium and a half, although it is patently clear that when the ice retreated at the end of the last Ice Age that people did come north. It was well over 10,000 years ago, and in that time it is clear that society developed in interesting and important ways here in the north, as well as around the Mediterranean.

It also means that certain ancient records must be re-evaluated in light of this new evidence.

If Caledonia was indeed this connected in Neolithic times, then it seems reasonable to presume that its peoples continued to interact with its neighbours outside the gaze of the Classical World.

There’s one last point in regards to Caledonia: depending on tradition, St Andrew was born about 5 or 10 AD, and died about 70 AD. The Battle of Mons Graupius – which is obviously extremely relevant to this blog – is believed to have taken place in 83 AD. Now, if we presume that Andrew visited Scotland some time before his final leg of the Fourth Journey, he could feasibly have encountered the Caledonians only a few short decades before Agricola’s campaign, and possibly around the time the Romans began their conquests of Britannia. Wouldn’t it be amazing if he did visit Caledonia, possibly meeting Calgacus’ tribesmen – maybe even a young Calgacus himself? None of this is to say it definitely, absolutely happened. I love history: I also love historical fiction, which is all about casting history in a new light based on what we deduce centuries, even millennia after the events. 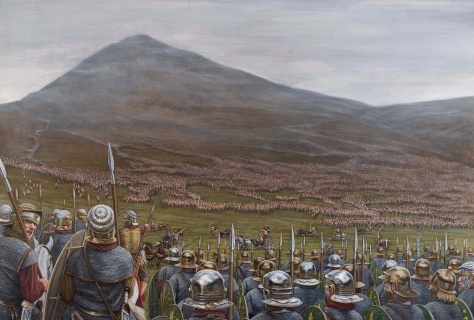 Even if Andrew never did visit Caledonia, the idea such a journey was actually possible is encouraging: our land was not just an afterthought, a wilderness that the Romans simply didn’t have any interest in (yet still saw fit to invade with tens of thousands of soldiers over the course of several campaigns & the construction of two great walls, of course). If nothing else, our patron saint is another link to a poorly understood and under appreciated period in our land’s history.

One thought on “The Adventures of Saint Andrew, Part 5: The Outermost Ends of the Earth”