I haven’t slept more than a few hours in the last three days.

An hour or two snatched in between flurries of activity.

A dream from which I’ve now awakened.

Hope this is coherent.

First of all, once again, thank you to the people of Inverclyde who voted to remain part of the European Union. The official result of the independence referendum was a statistical dead heat which was handed to No on the slimmest margin in all of Scotland: this was only after literally hundreds of voter forms delivered to the Electoral Commission from enthusiastic independence supporters in the Yes Inverclyde shop were rejected. This time around, there was no ambiguity:

That made for a 64% Remain vote – a smidgen above the Scottish average of 62%, and the 8th largest Remain vote of all 32 Council Areas. Unfortunately, the UK broadcaster seemed to cross wires with that weird alternate universe again: 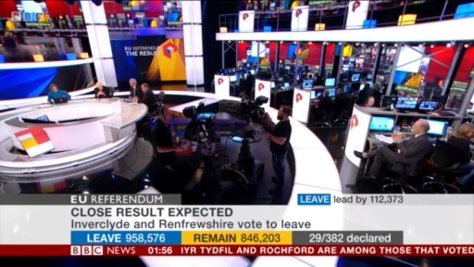 (Seriously, a whole quarter of an hour during a historic referendum where they announce the results backwards?) 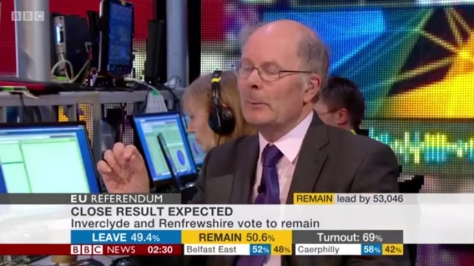 I might do a post on the day (after I’ve done one on the General Election, and the Scottish Election…) but I will say this: all of the campaigners there made a decision not to celebrate the result, whatever it was. It just didn’t seem right, in the wake of Jo Cox, to cheer knowing that her children are motherless and her husband a widower. It was a sombre coda to John Mundell’s career as Chief Executive of Inverclyde Council – and, I think, reflective of the growing mood of the UK.

I always worried about how I would react to No voters turning to Yes. I feared I would be resentful: “why weren’t you there for us when we needed you? Why didn’t you listen to us? Why did it take this unmitigated disaster for you to get it?” I don’t take pleasure in being vindicated, knowing that no matter what happens, or indeed happened, history will still record Scotland as the only nation to ever reject its own independence.

Then it started, little by little, as people who reluctantly voted No said they might vote Yes “next time.” Others said they would be open to independence, it just wasn’t a good idea right now. And there are even a few proud No voters who were so aghast at the litany of broken promises that they became staunch Yes supporters following the 19th of September 2014. And I felt… joy. No “I told you so.” No “you should have listened to us.” No “too late now.” Because I realised that it so easily could have been me. I’ve been lucky, as I do not regret a single vote I’ve ever cast at the ballot – but I’ve made plenty of bad decisions. And I knew that the last thing anyone wants to hear from someone who shares their view is scorn.

Now that trickle is starting to cascade into a flood. Better Together activists, campaigners, solicitors, donors, historians, MSPs, candidates, former MPs, former First Ministers, and more either acknowledge that there has indeed been a material change in circumstances, or have outright pledged to vote & campaign for Yes. David Torrance says the SNP have been “completely vindicated” in their EU argument. Peter Mandelson said he wouldn’t blame the Scots if they sought a second referendum.

And yet, I still feel heartbroken for my friends in England & Wales, who don’t have the option Scotland has. I didn’t want independence this way.

Let’s say it all comes to pass: Scotland votes remain while England votes leave; a mandate for a second referendum is sought and passed; the result is a Yes vote, and Scotland’s membership of the EU continues as an independent nation while the rUK leaves. What’s the problem? The problem is that the people of Scotland chose to be independent not from a reborn sense of confidence and assurance, but because of a wrong done to them – being dragged from the EU against their wishes – and the fear and uncertainty such an action has done to them. The fear of leaving the EU may be enough to outweigh the fear of leaving the UK for those soft No voters. Isn’t that to be expected, given how enthusiastically and vigorously Better Together proclaimed that only remaining in the UK could guarantee Scots’ place in the EU?

Would I still take it? Of course I would. If this scenario causes the surge in support for independence needed to justify and win a second referendum, as polls have suggested, then we must make it work for us. But I could not help feeling cheated – cheated of a chance to rebuild an ancient nation not from anxiety over being isolated from our neighbours, but to shake off centuries of cringe and self-doubt to reassert our status as a polity, a country, a people. A referendum triggered by a Brexit would mean that our independence was made into a choice between two uncertain futures, where we would be forced to choose between two unions. How much better would it be for us to make the choice for ourselves, rather than be forced into it?

Nonetheless, I’ll take it. There has been a material change in circumstances. While the arguments haven’t changed – currency, borders, migration, trade, economy – the answers have changed. Why would we even entertain a currency union or sterlingisation with a depreciated pound? How will trade be affected without land continuity? Where will we put all the (welcomed) Brefugees given our housing situation? What will our new economy look like? And why on earth are we still even listening to Blair MacDougall?

We’re going to fight for it again. It will be different in some ways. In others…

The BBC is fighting for its very existence.

10 thoughts on “There Has Been A Material Change in Circumstances”