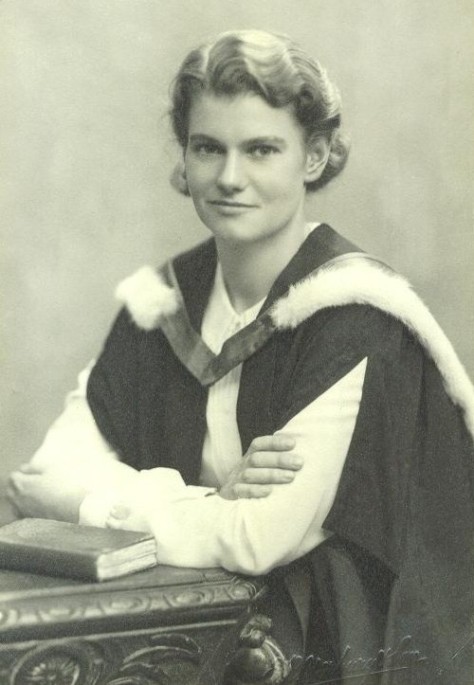 Professor Anna MacGillivray Macleod of Kirkhill was the first female professor of Brewing and Biochemistry in the history of the world.

I attended the launch of The Mighty Women of Science, an alphabet picture book by Claire Forrest & Fiona Gordon, several months ago. I met Claire at the previous Glasgow Comic-Con, where she told me about the book. She wanted to publish an accessible, positive, informative book that celebrates and acknowledges the many contributions women made to the advancement of knowledge. I’m greatly supportive of such endeavours, and so I said I’d attend the launch.

The launch at Waterstones in Glasgow was very well-attended, and the talk was excellent. I’d like to share one anecdote in particular, which gave me much cause for reflection, and I think very relevant to what’s been going on recently in the world of Scottish politics. 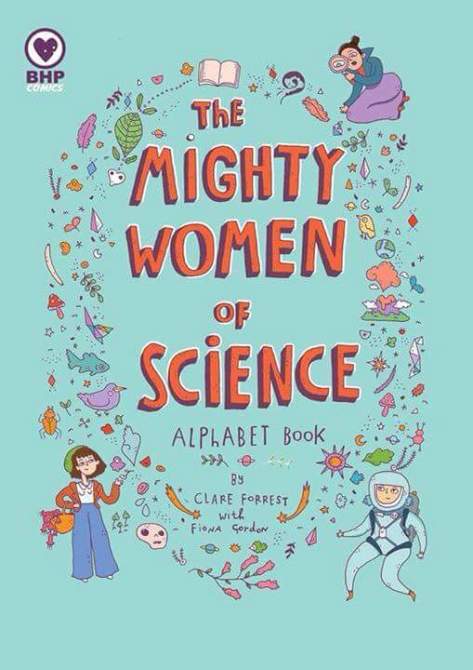 Claire & Fiona’s talk was generally positive, but they did make note of a few of the struggles women of science experienced: in particular, the difficulty of being heard in a crowd of “white bearded men.” I immediately thought of Mary Anning, who the Geological Society of London thought was less worthy of inclusion than their “no women” policy, yet nowadays is considered one of the most influential British women in the history of science. I also felt a wee twang of residual male guilt, seeing as one of the reasons for my current “look” is a great love of those “white bearded men” whose work & discoveries had such a great impact on my life.

Sure enough, Mary Anning came up in the discussion as an example of the systemic prejudices women had to overcome for the love of knowledge and human endeavour. The panel discussed how she discovered a new prehistoric animal, whose name escaped them for the moment: they took a few seconds to read through the book to find out what the beastie was. Now, as a lifelong palaeontology enthusiast, I didn’t even have to rack my brains to remember Mary Anning’s discovery, and I ached desperately to call out “Ichthyosaurus!” But I did not, because I was a “white bearded man”: was it not utterly against the entire spirit of the thing for a white bearded man to barge in on a celebration of women, by women? So I sank into my chair, mentally screaming “Ichthyosaurus! Ichthyosaurus! Please say Ichthylosaurus!”

After the talk, I took both copies of my book to get signed, one for my darling niece, who could easily be a Mighty Woman of Science herself should she wish to take one of the many paths open to her talents. I related my conundrum to Claire et al, and we all had a good laugh about it – but I remember that they said I should have spoken up. This was about celebrating women in science, after all: it wouldn’t have taken away from Mary Anning’s achievements for a white bearded man to credit her for her discovery.

I think back to this event whenever any curfuffle around social dynamics where my genetic makeup at birth – something I, indeed no-one, could control – pre-emptively affects any opinion or experience I may have in the discussion. 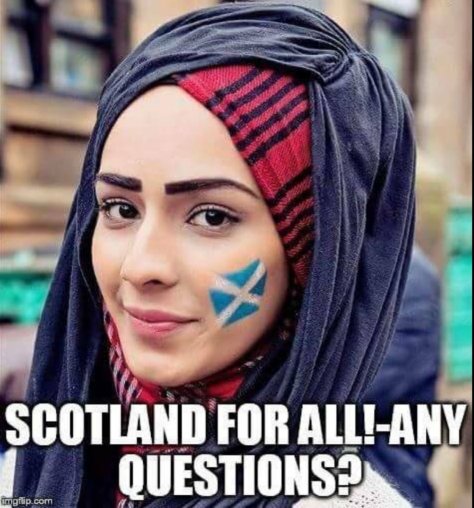 It’s something that I’ve pondered throughout my life, that dichotomy of empathy for others regardless of gender or ethnicity, and the stark realisation that I can never truly know what it’s like to be a different gender or ethnicity. So, when Sadiq Khan made comments in a speech in Perth, I felt that familiar, excruciating paralysis: to know from experience & what I’ve learned that something is wrong, but to fear responding would be piling onto the very problem we’re all talking about.

So, again, I kept quiet, more or less. Others did not, and all power to them, particularly those wonderful English Scots who refute the equation of the Scottish Independence Movement to division based on anglophobia. For me, the “entire spirit of the thing” is for people who actually live and experience what it’s like to be a person in their situation to relate their experiences, and for those who do not to listen & learn. It’s all well and good for me, a Scot of several generations of Irish and Scots hopping back and forth between Scotland and Ireland, to say in all sincerity that my support for Scottish Independence has nothing to do with dividing “between Scottish and English”; but I’m not an English Scot, I haven’t lived as an English Scot, so I cannot speak of the experience of being an English Scot. Sylvina Tilbury, Math Campbell-Sturgess, and the many English Scots for Yes can. Similarly, I cannot speak of the experience of being an Afro-Carribean Scot, Asian Scot, or Danish Scot: Graham Cee Campbell, Anas Hassan, and Thomas Widmann can.

If you’re of the opinion that only those with direct and personal experience regarding a subject can talk about that subject with authority, then perhaps we should all listen to what those people are saying – on both sides of the argument. 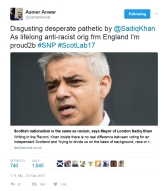 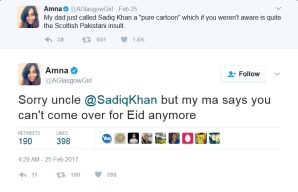 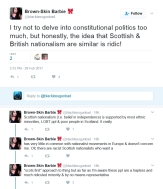 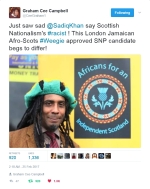 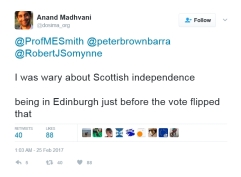 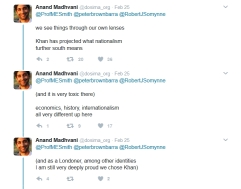 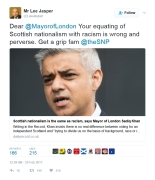 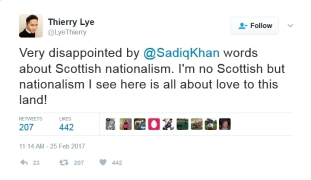 One particularly eloquent voice is that of Robert J. Sommyne, whose response (which I highly recommend reading) to Mr Khan’s speech was published in The Guardian today:

For many, to vote for Scotland’s autonomy was to reject the history of imperialism while making sure it was remembered and learned from. To leave the union was, for them, a redemptive act and the start of a process of becoming not a shuffling nation of self-pitiers but one mature enough to talk about its flaws. To leave the UK state with its Tory permanence was, to those people, an embrace of the world…

… As someone who grew up in England with an existential struggle of what I meant to the national ideal, the independence referendum gave many like me a chance to feel accepted and safe in a UK that is becoming increasingly hostile to difference. For more than 1.5 million people in Scotland, half the country no less, the ambition is not being “better than England”, but aspiring to just be better in an age in which progressivism is under threat.

Sometimes, the best thing you can do isn’t just listen: it’s to provide the opportunity for others to be heard. Scotland is, ethnically speaking, somewhat monolithic: it’s all too easy for minority voices to be ignored, or tokenised, made into playing pieces for one game or another. Likewise, it isn’t difficult for sympathetic voices to feel concern that their help may be counterproductive and patronising. But as Mr Sommyne points out, the world is going in a dangerous direction. We can’t afford to tiptoe around the big issues any more – and that means people like those above need to be heard more than ever.

2 thoughts on “Mighty People of Independence”