So the new clarion call is “if the SNP win a majority in the 2021 Scottish Parliament elections, then we’ll recognise the mandate that we’ve refused to recognise no less than four times since 2015.” (Unless you’re Lisa Nandy, Willie Rennie, or Alister Jack.)

Here’s the thing, which it amazes me hardly anyone brings up – by every reasonable measure except the number of seats (in a system designed explicitly to prevent any party gaining a majority) & regional vote share, the SNP have a stronger mandate for an independence referendum in 2016 than they did in 2014.

It is only because of the method used to elect members to the regional list that the SNP lost their overall majority despite increasing their vote share, the number of voters, & the number of constituency seats – which tend to be all that matter in First Past the Post systems such as the UK’s ancient regime. (And this isn’t taking into account that the SNP went into the first independence referendum with a mere 6 MPs and 19.9%, etc.)

So this poses an interesting question. 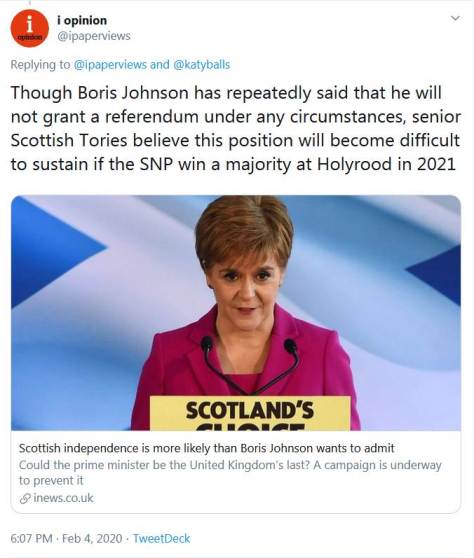 Preamble. Let’s imagine that the SNP decide to bite. Let’s suppose that those who said even an outright majority wasn’t enough to constitute a mandate – like the current Coalition Party Branch Office Manager, possible Opposition Party Leader, and Secretary of State for Westminster in Scotland – change their mind, and accept that an SNP majority of seats is enough. Let’s further imagine – however unlikely such a situation may be in terms of variables & unknowns – that the result of this election is a replication of the 2011 election. 46.5% shrinks back to 45.4%, 59 constituencies shrinks back to 53, & perhaps over a hundred thousand votes go to other parties – but, miraculously, the SNP gets the 2.3% of the regional vote that (presumably) went to other pro-independence parties like the Greens, whose vote share on the list also increased, in 2016.

Here is my question: if the SNP lose constituency seats, lose vote share, and lose voters, but gain a majority because of a perfect storm of a gerrymandered system designed to prevent such majorities from taking place, would that still constitute a mandate for an independence referendum? Is a majority won by losing constituency seats & vote share but topped up by an obscure mathematical equation somehow a more concrete demonstration of the people of Scotland’s voice than a constituency vote which eclipses every UK government’s mandate in living memory? Would the party of Scottish Independence losing momentum be interpreted as a mandate for a second referendum where its’ gained moment has not? Having laid out the terms, would you finally respect what the people of Scotland have been telling you since 2014?

Or would you – as I, sadly, suspect – simply move the goalposts yet again?

Maybe you’ll demand the SNP have to win over 50% of the vote – something no party in the UK, let alone Scotland, has achieved in half a century – only to then argue that “not everyone who voted SNP was voting for independence,” like you did in 2015?

Or perhaps you’ll go further, demand not only an SNP majority, but that two thirds of the Scottish Parliament – which was, again, this cannot be stressed enough, designed explicitly to stop the SNP in the first place – must vote for a second referendum?

Heck, we’ve already had plenty of voices calling for a constitutional moratorium of up to and including 50 years – will you make the words & opinion of two people more important than that of five million? How come the UK Parliament must never bind its successors, but the Scottish Parliament must? 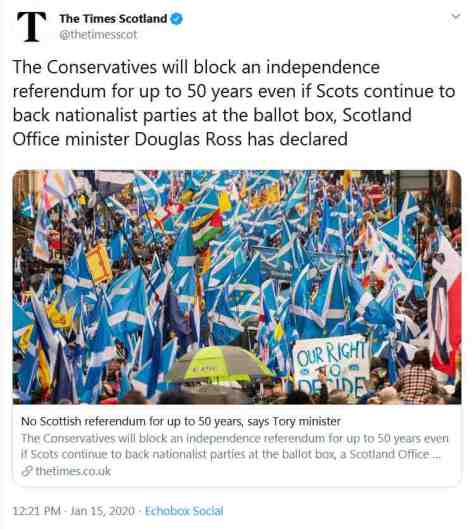 The truth is that there is no defense. It is, quite apart from everything others have said (“undemocratic” probably being the kindest), simply illogical. If every election since 2014 has been moulded and shaped by the independence referendum, then the election results surely must reflect opinions on future independence referendums, right? So what does it say when the party of independence consistently & regularly outperforms literally every election they’ve had in their history after 2014, while the major opposition parties have either collapsed into insignificance, or vampirised the Always-British vote only to realise that still means less than a third of the electorate?

According to them, it means that all they have left are meaningless, worthless soundbytes & demeaning personality politics. Saying the people of Scotland – literally millions of people – shouldn’t have a vote for independence whenever they damned well please because some politician “made a promise” would be farcical even if it was true.

Because if the people of Scotland didn’t want another independence referendum, then why has the SNP vote share continued to increase well past the levels which delivered the first one? I mean, it can’t be because people vote for the SNP because they’re a party of good government, because you say the SNP are wrecking the NHS and schools and bridges and road signs and Burns Night.

So, if the people of Scotland don’t want another independence referendum, and if the SNP are failing in government, and your parties have lost every elections since 2014 on precisely this dual ticket of “obsession” and “incompetence”…

… then why are the people of Scotland voting for the SNP at all?

One thought on “Quick Question for Democrats”