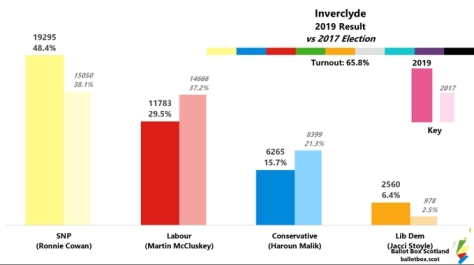 The Scottish peoples’ mandate for a second independence referendum has been reinforced for a fourth time. The SNP had their second best general election result in the party’s 80-plus-year history. Ronnie Cowan, elected to represent Inverclyde for a third time, has increased his majority – and joins 47 other pro-independence MPs. 81% of Scottish MPs – 1 in 5 – is pro-independence. That’s more than the 1918 General Election result in Ireland which preceded the Republic of Ireland.

Anyone who says that the SNP have no mandate for an independence referendum (not even outright independence negotiations, the mere democratic exercise of a referendum) is, to put it bluntly, either lying or stupid.

Meanwhile, England has descended further into the abyss. Aided and abetted by “moderates” and “centrists” who act as midwives for the unspeakable in the name of “reason”; enabled by an establishment who refuses to take the direct action needed to stop this assault on our collective freedoms; facilitated by a “neutral” state media who had one of the architects of the lawbreaking EU referendum on as an election night pundit.

WATCH | Arron Banks on tonight's results: "A brilliant victory on the scale of Mrs Thatcher, which probably means two terms… I think we'll get the kind of Brexit we were looking to get… we set out to make the Conservative Party conservative again: job done!" pic.twitter.com/gGRXzxvzdZ

It really is like some sort of nightmare, isn’t it?

We tried to tell you.

There is no pleasure in that sentence for me. No comfort, no vindication, no satisfaction – because we’re still stuck here. Not even the relief of getting five years’ worth of frustration off my chest. Because what good does it do to simply reiterate what we’ve been saying election after election after election? But because the official result in 2014 was to give the United Kingdom one last chance, we had to do our best. And how did the United Kingdom repay the loyalty of 55% the People of Scotland? By ignoring us. By belitting us. By dismissing, overruling, and abusing us.

If England truly wanted us to save them, then they could at least have met us halfway – not by voting in psychopathic disaster capitalists in over half of their seats. If this was truly a Union of Equals, then we wouldn’t even be entertaining indyref2 – surely a Union of Equals would recognise the right of Scotland & Northern Ireland to remain in the EU, while England & Wales leave? If there was even a chance of change – real, lasting change, not the sort of change that can be undone within an election cycle – then support for independence would not be as high as it is now.

What a Christmas present the people of England and Wales have given to us all. What hope for the disabled, the poor, the vulnerable; what reassurance to the EU millions, the migrants, the disenfranchised; what gifts to those who will not make it to 2020. The perverse fascination with “Christmas in Poverty” – Charles Dickens’ “A Christmas Carol,” Andersen’s “The Little Match Girl,” all the way to “The Little Drummer Boy” – the fetishisation of such noble suffering, which only the beneficence of Our Betters can rectify with their fantasies of Trickle-Down Economics and miracles of Work Setting You Free. I’m sure it will be great comfort to everyone who starves, freezes, and dies over the cold winter nights to come.

And let us not ever forget: for all this was the “EU Election,” where it was Leave bitterly fighting against Remain, where stalwart MPs were unceremoniously defenestrated in the name of “democracy,” when it came to the matter of Scotland, all that disappeared. Arch-Leaver and Arch-Remainer fell into line, united in condemnation – against Scotland’s right to self-determination.

Wake up, Scotland. Wake up and smell the ashes.

One thought on “The Nightmare Before Christmas”