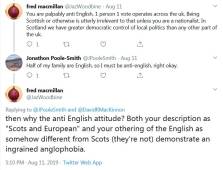 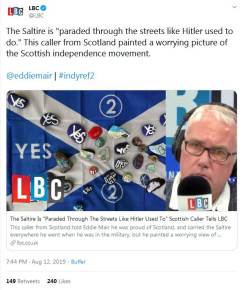 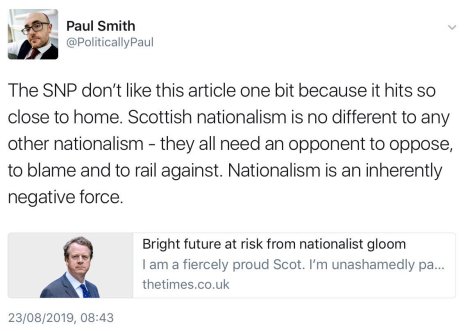 Independence supporters have been dealing with this nonsense for as long as we’ve been part of the cause.

Back in July, Ross Thomson claimed the SNP has “anti-English sentiment” on a level comparable to antisemitism and islamophobia in other parties:

Then the Secretary of State Supposedly for Scotland directly compared the cause of Scottish Independence to the Far-Right, an utterly contemptible move straight out of Better Together’s catalogue of truly despicable accusations:

I’m sorry but I’m not sure I can spot the difference. Like nationalist movements the world over, it requires an enemy to make it thrive. It needs an ‘other’ to rail against. It’s all about finding something at which to take offense, so they pick fights about flags on packaging, scour news bulletins and political shows for examples of imaginary bias.

Yesterday, on 23rd August, Mark Smith writes an article for The Herald that seems (and I’m putting this as gently as possible) unbelievably arrogant in admitting that it’s almost entirely supposition based on anecdote:

I’m not saying – just so you know – that this sort of deluded, anti-English opinion represents a majority in the SNP. But it has to be there, doesn’t it? The SNP wants to sever the union with England so if you’re anti-English who else are you going to vote for? And did anyone who’s anti-English vote No in 2014? By definition, Anglophobia is going to be a thread in the SNP. More than that: it is a stratum in the geology of Scottish nationalism.

I have a very personal disgust for such ignorant statements. 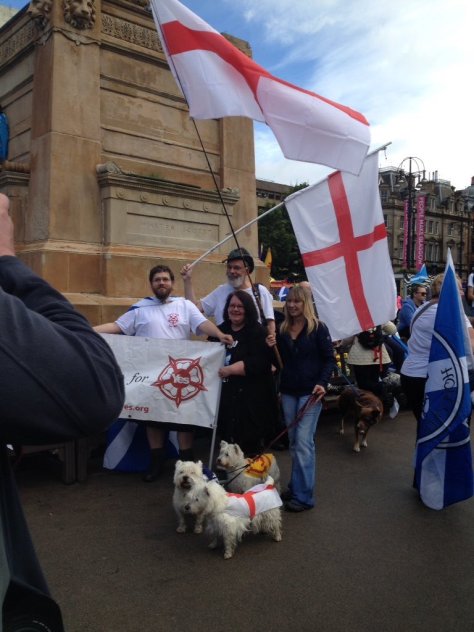 Still, they met up later.

Cast your mind back to 2014. It’s 2:00 AM on the night of the Scottish Independence Referendum, at the Waterfront Leisure Complex. The results for Clacks and the Northern Isles came in, and I feel like my heart has been wrenched out of my ribs. I distinctly remember swearing far too loudly, kicking a chair over, and storming out of the room – loudly enough for the conversation to go quiet for a moment. I paced back and forth while some fellow Yessers tried to calm me down. At this point the sheer shame in my nation’s people set in, and I started to cry. One hugged me tight, & said quietly “don’t let them see you bleed” – “them” in this case being the opposition.

This individual, and their partner, campaigned for independence and the SNP for quite a lot longer than I had at this point. They campaigned in elections that they knew they could not win. They knew what it was like to lose, despite coming so very close. They were office bearers & activists for a party that seemed to be constantly defeated by an arrogant, entitled giant that weighed the votes rather than counted them. They’ve been to counts where they’ve lost before – too many – and most of the winners (with notable honourable exceptions) were rarely gracious. And when it seemed all too much for me, those two activists helped bring me back down to earth, enough to go outside for some fresh air and contemplation. I returned to the count, gripped the handrail, heard the result, thanks to those two campaigners.

The two activists I’m talking about were English Scots. When I cursed the results from Clackmannanshire and the Northern Islands, it was two English Scots who reminded me that it’s a miracle we got this close at all. When I contemplated running away rather than facing the contemptuous grins of the opposition, it was two English Scots who urged me to be gracious, dignified, and positive when I wanted to be none of those things. When I was feeling at my very darkest, when all the hope and pride and belief in my nation seemed to tumble into the abyss, it was two English Scots who steadied me against the whirlpool of despair pulling me down into the earth. I didn’t push them away, or blame them for Westminster, or dismiss their opinion as irrelevant. It wouldn’t have occurred to me to think of them as anything other than fellow independence supporters. They were there for me when I needed them, because we were all there for one another – English, Scot, or otherwise.

This is why I take the “Scottish Independence is Anglophobia” meme so very personally – because when I felt on the verge of mental breakdown over Scotland’s future, when I pondered what the point in campaigning for Scotland after this, it took two English people who shared my belief to save me from those thoughts. Every time someone pretend we Scots hate English folk, they traduce the name of those English people who gifted us the immense honour of calling Scotland their home. They sully the name of those folk living in England who, while perhaps sad to see us go, understand or even support our desire for self-determination. They disgrace every English person who believes in democracy, in freedom, in self-determination, when you present this ultimately right-wing justification of imperialism as “solidarity.”

So given this proposition is not only false, but unproductive, just why is it being pushed so strongly?

Simple: this message is not for the people of Scotland at all.

It’s for the millions of English people who have been told for generations that we Scots are parasites, biting & irritating their generous hosts while receiving their precious lifeblood:

It’s for the pseudo-intellectual anglosupremacists like David Starkey, who insist that their England is so much better than “small countries” by virtue of its lack of nationalism(!):

It’s for all the folk who looked at this year’s GERS and concluded that perhaps it’s time to cut the apron strings from Nanny:

The people behind the “Scottish Independence is Anglophobia” meme don’t care who gets hurt in the crossfire, any more than they care about consequences for their monstrous xenophobic rhetoric, their heartless social engineering, their unforgivable soft eugenics. They don’t care that feelings – or people – are hurt. They simply want to stoke up fires of resentment, heighten feelings of aggression and confrontation – so they can manipulate. People are easy to manipulate when their minds are clouded by resentment and fear.

I note that many English folk considering moving to Scotland ask with no small trepidation if they would be “allowed” in. They are so used to the hostile environment nursed by successive vampire governments that they cannot imagine a nation being anything other than the cold, severe, constrictive system created by the UK. They bring up old Scottish ancestry, promise they’ll be hard working, even lower themselves to “Brefugee” status. It’s almost heartbreaking to read.

But then, consider: according to the UK Establishment, aided and abetted by the UK Press, the Scots hate the English. Fears of White Settler Terror, magnifying anti-English sentiment completely out of proportion, all while pretending that we’re sucking the life out of their NHS, their public services, their childrens’ future. An entire election campaign was built around the Scottish Bogeyman, out to bankrupt England with its rapacious appetite. Given the story the people of England have been told, is it any wonder some might be a bit apprehensive?

The best folk to prove that fear unfounded are those who made the journey from England to Scotland already.

*If you’re an English Scot for Yes & I’ve shamefully left your name out of the list, or you’d rather not be added to a list, please leave a comment & I’ll address it as promptly as I can.

4 thoughts on “For English Eyes Only”