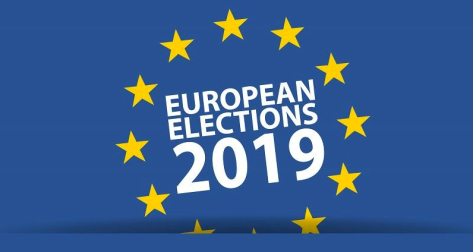 Soon we’ll know the results of the European Parliament Elections.

I remember every major poll since 2014 vividly: almost perfect recall. This one stood out for me in ways that chilled me to the bone.

Independence activists in Inverclyde are exhausted. Mentally, physically, emotionally, they’ve had something to campaign for and a polling day to take on just about every year since at least 2014, with only 2018 as a brief respite. I and countless others were out knocking doors, checking numbers, standing outside the polling stations, and counting the ballots as they piled out in 2014, 2015, 2016, & 2017. And in all those elections and referendums, I felt a buzz in the air: a sense of passion & energy. Even as folk were driving to & from work, walking down the street, dropping the weans off to school, one got the sense that most people were very aware it was Polling Day, and they were either on their way to vote, or already voted. Whether they were voting out of hope, frustration, rebellion, anger, or a sense of simple civic duty, it felt like Polling Day.

The 23rd of May 2019 felt very different to me. From the way folk acted, you’d be surprised there was an election happening at all. Practically no posters for any party, hardly anyone on the street at all, no sense of business or buzz – as if this was a day like any other day. When I went to vote in the late afternoon, I habitually asked what the numbers looked like. The polling staff said it was much like the 2014 European Elections: quiet, not many people, just generally not as much as the two referendums or even the last few elections.

My heart sank to hear that, and not for myself. The disenfranchised Scots from the EU, and family, friends, and colleagues who worked far harder than I did for Scotland’s place in Europe, did not deserve such apathy – not when these are the most important European Elections in Scotland’s, indeed the UK’s, history. I knew it would be a different story in England and Wales, because England & Wales had a phoney narrative of “betrayal” (that funny definition of betrayal which means “doing exactly what you want them to do, but just not quickly enough“), not to mention still-unresolved scandals about dark money, privacy breaches, and anti-democratic gerrymandering. If they could lie, and cheat, and steal a referendum without any serious consequences, what possible deterrent could there be to stop them lying and cheating and stealing an election?

But more heartbreakingly, even if I couldn’t agree with the apathy of Scots who simply couldn’t bring themselves to vote, I struggled to condemn them too. We voted in 56 SNP MPs, & England’s MPs treated the entire nation as poorly as it ever did. Then we voted in the SNP to an unprecedented third term at the Scottish Government & a cross-party vote for an independence referendum in these exact circumstances, & they still pretended that wasn’t enough to justify a Section 30 order. Not even when Scotland delivered a 1200% increase in the number of MPs for the Government’s own party did Westminster see fit to listen to (let alone compromise with) Scotland, as those 13 MPs proved as worthless and pathetic in defending Scotland as the opposition party’s representatives were for decades before.

I maintain my faith in the Scottish Government, in the First Minister, the Cabinet, and the SNP as a party despite some of the most trying times in the party’s history. When the Scottish Government laid the groundwork for an independence referendum, not only did I believe that they would make it happen, I was willing to put money on the line against someone who’d proven to be correct on nearly every prediction of substance in the last decade. Not everyone in the movement, even the party, keeps that faith, with such crazy times. I can’t blame them.

But there’s something which I saw in the polling station that steeled my resolve.

The town of Gourock is typical of many on the West Coast of Scotland: overwhelmingly White Scottish, with less than 10% “other.” These “others” are my friends, family, neighbours, colleagues, acquaintances, who were born outside of Scotland & the UK – some outside of Europe too. I knew them well even before I got into politics, joining political parties & Community Councils. But whether I’m canvassing for a nationwide referendum or delivering leaflets for local garden parties, it doesn’t even occur to me to treat them as anything other than my fellow Scots, fellow Gourockians.

I’ve also become fairly acquainted with the polling staff. Even though I rarely see them outside elections or other council-run business, I recognise names & faces, enough to exchange smiles & greetings. So I went to receive my voting form, giving my name & address, absently watching the staff run his ruler down the list of names until he arrived at HARRON.

This list was identical in nearly every way to the list for every referendum & election I can recall – except, on this list, some of the names were printed in red.

I noted that, as the staff flipped the pages, somewhere between a sixth and a fifth of the names were in red. I’ve lived at the same address & attended the same polling station for close to 20 years. My memory of every poll before the indyref is hazy, but I don’t think I’ve ever seen a list with so many names in red. I did not immediately realise the significance, and I didn’t enquire as to why there were so many names in red: I put an X next to the party I want representing us in the European Parliament, said cheerio, and departed.

It wasn’t until later I put 2 and 2 together: the names in red are for EU citizens who had not filled in the UC1 form by the 7th of May. I was later assured that if one of the names in red arrived at the polling station with the UC1 form, they might get to vote. Apparently the short notice given by the UK government to local authorities meant that people living in the UK may have done everything completely correctly, but failures on a local & national level denied them their vote. 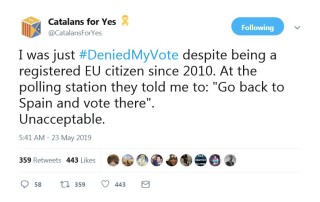 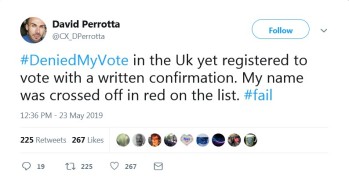 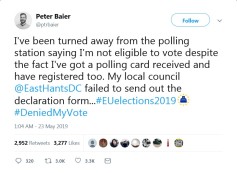 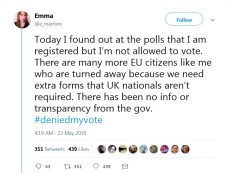 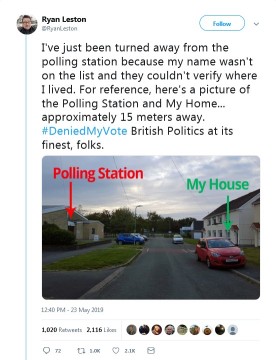 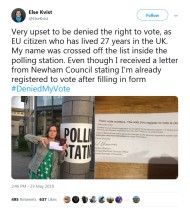 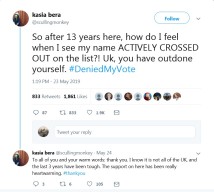 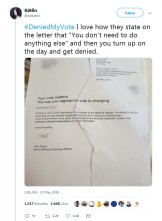 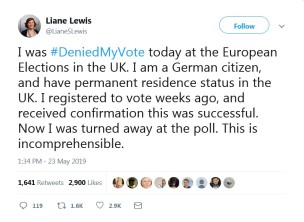 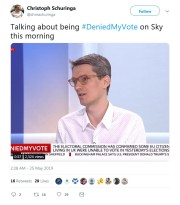 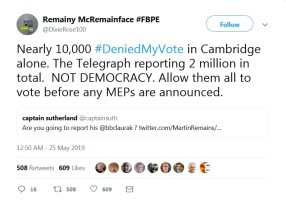 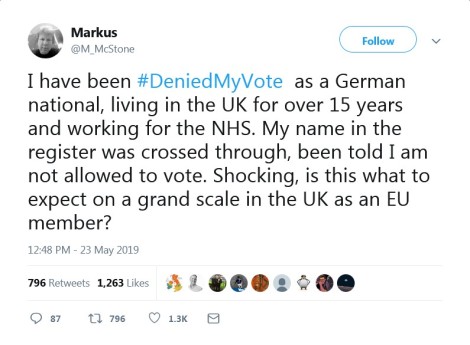 There comes a point where Hanlon’s Razor is blunted to the point of uselessness. You cannot say the UK Government didn’t know this would happen, because EU citizens, MEPs, MPs, and Scottish Government Ministers had been warning them this could happen for months. This, on top of the indignity & democratic outrage that was denying those same EU citizens the right to vote in the referendum which affected them most of all in the first place, is why I won’t take any lectures about “democracy” from the Leave campaign.

The UK Government knew this would happen, and did nothing. In doing nothing, they made the possibility an inevitability. I struggle to see the leap from the UK Government’s intentional anti-immigration policies like the Go Home Vans and the sickening hypocrisy of the Windrush scandal to this. We have to stop assuming the UK Government are just incompetent. They knew exactly what they were doing.

And when the Leave party rejoices in their victory safe in the knowledge that no serious damage could come from the revelation that thousands of people living in the UK were denied a vote in a UK election, I’ll be thinking of those names in red I saw on the list. Did they get the UC1 on time? Were they turned away out of hand? Did they go quietly, call the presiding officer, the council, any of the political groups that could support them?

Back when the names on the list were all in black, it was simple. Same font, same colour, same style. We were all the same: all adults, all citizens, all with one vote. This election was the first where some people were named in black, and others were named in red. See how jarring it is when I write names in red all throughout this post, colouring it in? Imagine how much worse it is when it’s people’s names. The Polish family down the road. The Italian couple across the street. The Spanish lady a few doors away. A cousin’s wife from Germany. For the first time in my life, in the eyes of an election in the United Kingdom – where every vote is supposed to be equal – some people had different voting rights from others. It was a very dark, very disturbing realisation for me – because even with the problems with voter registration the UK has, I’m pretty certain voters with their names in black got their ballots without much difficulty. They didn’t have to produce specially-produced letters announcing that they were not the same sort of citizens as everyone else. They weren’t told to “go back and vote in their own country.”

This is their country. This is their home. The time is coming for the people of Scotland to decide where they stand: do they stand with a unitary state where the biggest country rules – that makes lists with some names in black and some names in red – which has become unrecognisable from the “family of nations” they proclaimed 5 years ago? Or do they stand with the people who made their homes, families, and lives in Scotland, whose family of nations is based on the cooperation of sovereign independent nations?

I’m not interested in staying in this UK for a minute longer – and it’s becoming clearer by the day what the future holds for England. The best we can do not just for our fellow Scots from EU countries, but those in England, is to decide our future with the EU on our own terms.

3 thoughts on “Names in Red and Black”