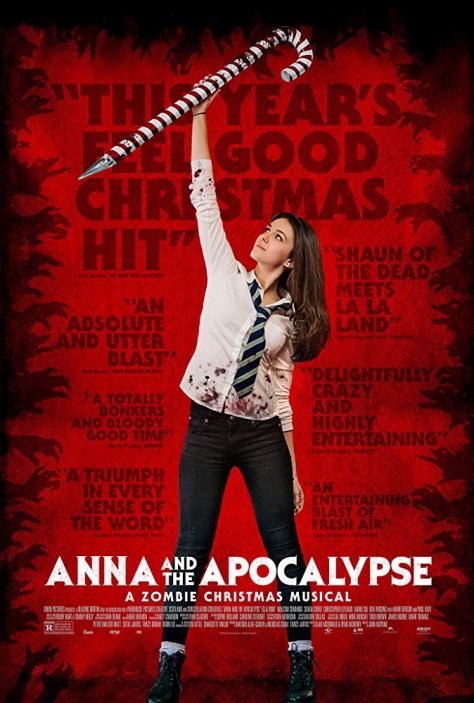 Do you think Paris is still standing?
– Anna, being particularly timely despite being filmed years ago

I feel like Anna and the Apocalypse personally set out to antagonise me. It’s an apocalyptic film that assaults the eyes & ears with Glee-esque musical numbers; it’s a film shot in Scotland (several places in my home area of Inverclyde, even!) with posh English folk and a Yank in the lead roles; all the characters I actually liked die before the final act while the ones I actively disliked survived to the end; it’s set largely in a school. I’m certain this is actually part of the film’s appeal, as well as its strength – to blend genres (the Intolerably Twee High School Full of Melodramatic Desperados Musical with the Interminable Zombie Apocalypse That Will Never Die Just Like The Titular Monsters Movie along with the Permanently Hamstrung By The Nature of Western Calenders Christmas Film) which are seemingly completely at odds with one another, and shine a light up to them all.

The film’s best scene echoes one of the best scenes of its closest cinematic ancestor, Shaun of the Dead, where the juxtaposition of an oblivious high school girl dealing with the epitome of First World Problems dances along a street strewn with wreckage and ruination, smiling and bopping along as people scream and run frantically from yer actual apocalypse is genuinely laugh-out-loud hilarious. Both films are at their best when the conventions of their disparate genres bump against one another, the cognitive dissonance leading to highly cathartic laughs: a character looking strangely & telling his mates to sit down as everyone starts spontaneously singing, the rejection of the term “zombie” that only seems to happen in zombie films, to the very Humans of Late Capitalism moments as people take selfies in the midst of civilisation’s collapse.

If zombie films reflect the anxieties of the time, then Anna and the Apocalypse seems to be our generation’s mad scream against the chaos which seems to be engulfing the world. Night of the Living Dead was released on a backdrop of civil unrest brought into American homes via then-new live broadcast footage on TV; Dawn of the Dead played to crowds of cinemagoers oblivious to the onset of consumerism and “greed is good” which would blight the following decades; 28 Days Later arrived in a world where few had any trust in The State to save humanity from the brink of anarchy. Anna simultaneously revels and excoriates it all: even if anyone survives at the end, the question remains: where now?

Anna got me thinking about Scotland’s role in all this. In this film, Scotland provides a backdrop. CGI vistas of Port Glasgow and Greenock in flames evoked a visceral gut wrench, reminding me of the times my homeland really was on fire. It isn’t the first time Scotland has played host to a gruesome undead playground: Glasgow doubled for post-apocalyptic Philadelphia in World War Z, while Doomsday went the extra mile and cordoned off the whole country CalHab-style. There’s a weird undercurrent in portraying the land and the people in this way, as a fantasy land for other people to frolick in, not for those who live here – the natural extension of our ridiculous land laws, where a handful of rich tyrants own vast swathes of our landscape, turning them into grouse moors and deer hunting ranges. Scotland as playground. At least the monsters in Avengers: Infinity War were still living, & didn’t do much damage to Edinburgh outside a few loose bricks & slates.

Scotland-as-Playground is not limited to zombies, horrors, or science-fiction, of course. How many stories are there of English or American visitors finding love and purpose in the Highlands and Islands, from Brigadoon onward? Even removing the undead element cannot remove Anna from decades of convention. So of course the main couple in Anna and the Apocalypse are two posh English kids, and of course the most competent badass rescuer is the American loner. I guess it’s too much to imagine a film shot in Scotland with two Scottish leads, where it’s a Scottish character who saves everyone, isn’t it?

Ach, perhaps I’m being too hard on Anna. It’s a miracle the film was made at all, and I feel the need to support it on its mere existence quite strongly. There are plenty of terrible cash-grab tax-write-offs to moan about. Anna was extremely ambitious, and even if it wasn’t for me, it’s extremely well done for what it was – probably the best it could possibly be. Anna once again highlights the difficulties we’re having as a nation without a state, where our ability to express ourselves is hampered and undermined by cloth-eared numpties who wouldn’t know art if it bit them in the shoulder and turned them into a zombie. We could do worse than look to the makers of Anna and the Apocalypse for inspiration.