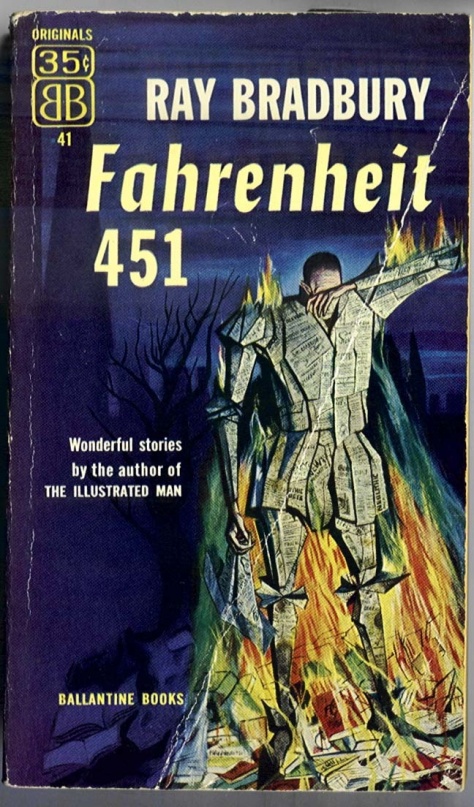 Banning books is a terrible thing, so I thought. I’m the sort of guy who still gets upset about the Library of Alexandria, the Maya Codices, and Scotland’s own National Records, so you can imagine how I feel about symbolic desecration of cultural heritage. Even though Ray Bradbury wasn’t thinking of censorship when he wrote Farenheit 451, the power of his narrative made it incredibly applicable – especially since the practise of burning literature still goes on, and many books are still prohibited on the basis that they might be dangerous, especially to those with suggestible minds.

Book banning & burning is a fixture of dystopian literature. After all, if people read subversive books, they may think subversive thoughts. They may find inspiration, even hope, within pages that whichever oppressive regime wants to redact from humanity’s collective consciousness.

But what about when it’s those oppressive regimes who are getting their inspiration from them?

I came across this chilling vision from a dystopian nightmare.

Would you scan a homeless person’s barcode to give them money?

A scheme in Oxford called Greater Change wants to provide homeless people with barcodes, so members of the public can give them money using smartphones.

The idea – like so many dystopias – comes from a good place. In modern society, fewer and fewer are carrying notes or coins: this makes it more difficult to give money to those in need. This scheme aims to streamline the process, allowing anyone to donate even if you don’t have spare change! Assuming you have a smartphone, of course. And an online bank account. And that you are comfortable with scanning people with barcodes, as if you’re doing your groceries, or reading tickets to let people into a concert – or checking a prisoner’s serial number. But let’s put all that aside: a system where you can give money electronically seems to be a good idea, doesn’t it? You’re making sure money goes to the people who need it. All the people who require such a service need is a lanyard with a handy barcode you can scan with your mobile: the state will take care of the rest.

Who could possibly have a problem with that?

It reminds me of a favourite author of mine: Robert A. Heinlein. That’s the Starship Troopers guy. One of his novels, Friday, is about a secret agent in a dystopian Earth where genetically engineered humans are required to have identification marks on their skin. The title character (being a secret agent for a shadowy corporation, another trope so beloved of Dystopias), is one of these “Artificial People,” who removes her identification mark as part of her work. Other Dystopian fiction – Richard K. Morgan’s Altered Carbon, Suzanne Weyne’s The Bar Code Tattoo & The Bar Code Rebellion, Jasper Fforde’s Shades of Grey – feature the idea of identifying certain groups of humans using markings like barcodes.

It isn’t as if the commodification – and dehumanisation – of the homeless is restricted to barcodes. In Austin, Texas, someone had the bright idea to turn the homeless into Wi-Fi hotspots. Kristian von Hornsleth’s no-doubt-well-meaning Hornsleth Homeless Tracker turned homeless people into mobile artworks you could buy – to raise awareness, you see. The readiness with which governments will resort to short-term (and profitable) measures like shelters rather than long-term affordable & available housing would be shocking if it wasn’t so drearily expected. That’s if they even notice the people exist.

Where do these people get such horrible ideas?

Pick a dystopia, and you’ll find someone, somewhere, that read it, and thought “what a good idea.” The all-seeing, all-knowing Big Brother projecting itself into your daily life, not caring whether you consent to it or not, controlling & analysing & monitoring everything you do with bureaucratic fervour? Practically passé these days: all the cool countries are doing it. The mind-numbing Family of Farenheit 451? Spawned an entire genre of television. Interpersonal facilitators like Logan’s Run? I’m frightened to even type Tinder, much less download it. I shudder to think what such peoples would think of Stand on Zanzibar or Le Transperceneige/Snowpiercer. Or Farnham’s Freehold. 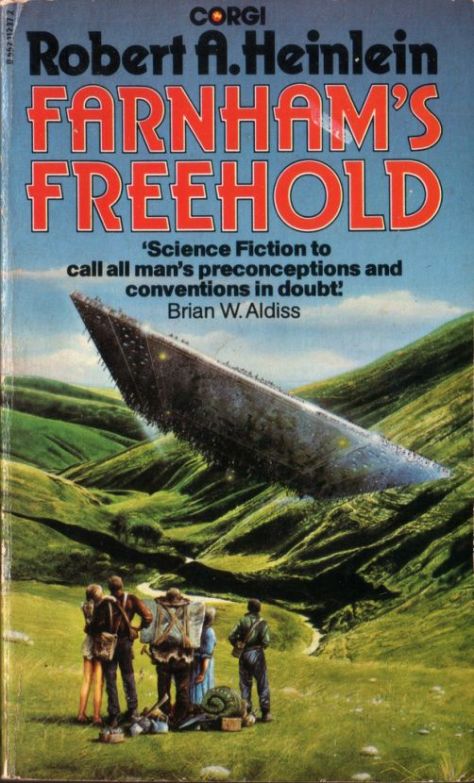 Normally I’d recommend people read the books I mention, but in this case… Well, if you do, you’d better have an iron-lined stomach.

That last one, also by Robert A. Heinlein, is a particular agony, because it’s the most frightening book I’ve ever read. It’s a post-apocalyptic story of the practical, determined, everyman Hugh Farnham who spends his days preparing for nuclear war. He thinks he’s the perfect survivalist, and due to his role as protagonist, it would be easy to presume that his actions – which include brutal enforcement of “democracy” at gunpoint towards his own family – are meant to be heroic. But several clues within the story – making simple errors most scouts wouldn’t make, for example – suggest that, in the best Heinlein tradition, he is being deliberately contrarian. Therefore, when we get to the second half of the book, part of you is utterly disgusted at the revolting, shocking, monstrous stereotypes & actions, while another part of you wondering if this is all a brash, bold, Swiftian satire of the average well-to-do white American’s Cold War paranoia?

The Dark Forces know. It isn’t as if they aren’t telling us. The influencers of the world directly refer to dystopian nightmares like The Camp of the Saints and The Turner Diaries, (and probably Farnham’s Freehold, come to think of it) but they aren’t afraid of twisting stories into the opposite of their original intentions either – like General Keith Alexander co-opting the optimistic future of Star Trek for “Information Dominance.” Just as books have inspired people on to great things, books are also blamed for some terrible things. Some people worry about taking dystopias too literally – that the inherent power of the genre is in its fairytale, fable-like qualities, not its adherence to realism or direct applicability to one period or regime or another. I agree – though more for the fact that people take the wrong things literally.

Should we dare continue allowing policy-makers to read the likes of 1984, Brave New World, A Clockwork Orange, and others, when they’ve clearly shown themselves incapable of distinguishing a terrible warning from a solid recommendation? Should we still be publishing A Christmas Carol when there’s a real and present danger that politicians take Scrooge’s solution to the surplus population literally? How long until the UK’s Ministry of Health decides to take the Jonathan Swift approach to the UK’s food bank problem, or that the smash hit The Handmaid’s Tale adaptation might offer population crisis solutions? Swift and Heinlein alike show that satire sometimes doesn’t work when people don’t want to see it: what chance do Orwell, Huxley, Burgess, and all the others have?

I still oppose banning books on ideological reasons. But given the way some people react to them, I’m starting to understand why it’s such a common occurrence. Even if all these things are meant to make the world a better place, if they truly believe that they are necessary for a brighter tomorrow, that it was done for the best of intentions… Well.

You know what they say about good intentions.

3 thoughts on “The Case For Banning Books”