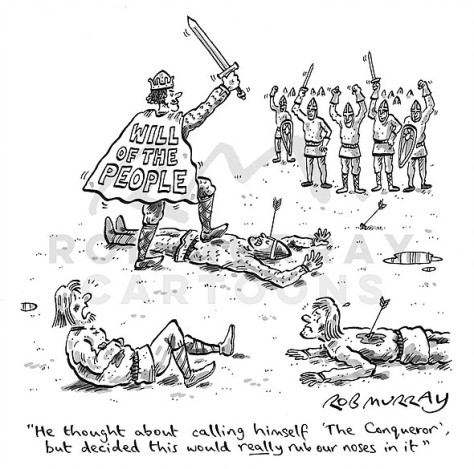 The “people” who exercise the power are not always the same people with those over whom it is exercised; and the “self-government” spoken of is not the government of each by himself, but of each by all the rest. The will of the people, moreover, practically means the will of the most numerous or the most active part of the people; the majority, or those who succeed in making themselves accepted as the majority; the people, consequently, may desire to oppress a part of their number; and precautions are as much needed against this as against any other abuse of power.
– John Stuart Mill, On Liberty, 1869

I knew Leave was going to win the EU Referendum months before the vote – on the 7th of September 2015, as it happens.

An amendment proposed to extend the franchise to include hundreds of thousands of EU citizens resident in the UK. This was right and proper: there is absolutely no democratic justification for their exclusion. They pay tax, they work, they even vote in local and European elections: they should be able to vote in any plebiscite on those terms alone. That they are the demographic which will be most affected by this decision is simply further evidence for their inclusion.

The majority of MPs voted against allowing non-British EU citizens resident in the UK to vote in the referendum on the UK’s membership of the EU.

The amendment rejected in this vote was:

The amendment was accompanied by an explanatory note stating:

The amendment was voted down. Not one member of the then-government voted in the interests of those disenfranchised voters – all to placate the extremists in their party. But what’s most unforgivable is that the UK opposition blindly and cheerfully followed their supposed foes right into the No chamber. I expected this from the government. But even after everything that’s happened, I never expected the opposition party to so readily vote for an EU referendum which would exclude hundreds of thousands of people from the most important decision in their lifetimes. All because SNP bad. Even back then, it should have been clear to everyone that EU citizens would find no friends in the Red Rosette.

You could argue that the Opposition could have put their own amendment in, so they wouldn’t have to “lower” themselves to vote SNP. They never did. Most of them didn’t even turn up to oppose the EU Referendum Bill at the third and final reading, instead voting for it literally 20 to 1. The UK Opposition Party completely, totally, and utterly prostrated itself after every single one of its amendments was defeated.

The majority of MPs voted for a referendum to be held on whether the United Kingdom should remain a member of the European Union.

The Bill provided for a referendum to be held before 31 December 2017 and set the question for the referendum as being:

The motion supported by the majority of MPs in this vote was:

The support of the majority of MPs meant this Bill could continue on the path towards becoming law.

It was not the referendum which was the point of no return for the United Kingdom, but the bill itself. When the UK Opposition decided it was more important to appeal to the “British Votes for British Citizens” ideology than to extend the franchise to a population which already votes in UK elections on a subjects directly meaningful to them, they set off down a path I have no intention of following.

This is why I have such a stark disconnect with like-minded “Remainers” and #FBPE voices: because even if they want to upend the result, they still frame the debate in a way that legitimises a referendum that simply doesn’t deserve it. Owen Jones wrote an entire article bemoaning how he couldn’t envision a single reason to stop Brexit:

Yes, as a socialist, I had profound reservations about the current incarnation of the EU, and even considered the case for leave. I dismissed the argument because of persuasive pleas from European leftists to stand together to reform and change the EU, and because it was clear that a hellish anti-immigration crusade beckoned. And so, alongside the Another Europe Is Possible alliance, I passionately campaigned against the Brexit juggernaut. Then the vote happened, and we lost. There seemed to be two conclusions that fateful night. One, challenge the bigotry, authoritarianism and intolerance of the Tory Brexiteers. And two, try to reconcile a bad result with the country’s future.
Which brings me to the “stop Brexit” campaign. Many decent and honest people are committed to reversing the referendum result. They fear a completely unnecessary national tragedy is befalling Britain, driven by myths and lies, and believe economic turmoil and national isolation await. It is perfectly legitimate to seek to democratically challenge a referendum result. But it is difficult to see how the current strategy, communication and leadership of this cause achieve anything other than doom it to failure.

I agree that the majority of prominent Remain advocates are not helping matters in the slightest. Focusing on the referendum’s advisory status & the fact the Leave campaign was a litany of falsehoods is not going to be particularly convincing when you put people who exemplify the morass of UK politics front and centre. Yet Jones, the democrat, the socialist, simply acknowledges the referendum “the vote happened, and we lost.” As if you just give up after “a bad result.”

At no point in his article does Jones even mention the disenfranchised – the lives changed utterly by a result in a referendum which deliberately excluded them.

We @the3million were your goddamn case, @owenjones84. For shame. https://t.co/hKGfdDaEZT

Will of the People*

The UK Government, the UK Opposition, and even the Coalition Parties have all agreed that, from an electoral point of view, EU citizens who may have lived & worked here all their lives are not part of the “people.” UK citizens are. Commonwealth citizens are. Not EU citizens. This has been a long time coming – one of the UK establishment’s dirty little secrets. They wanted this.

This is why I believe the UK will leave the European Union – and why Scotland must have an independence referendum before that happens. EU citizens in England & Wales are more than welcome to join us. UK politics does not want to hear you. We do.

In Scotland, “the will of the people” actually means something.

How can you know someone
Until you walk in their shoes?
Our parents taught us segregation
Now we’re singing the blues
The dynamic of America is progress for all
Well, can’t hold us back we’re right on the track
No wall is too tall
By the will of the people
We’ll take a road to higher ground
And don’t worry about that…

4 thoughts on “The Point of No Return”