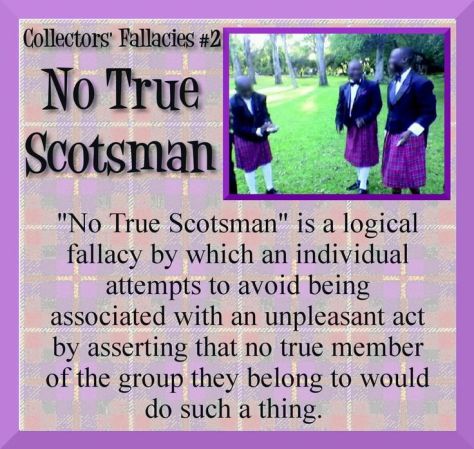 “You know that’s three English blokes at a wedding?”

Why is it “No True Scotsman”?

The term is generally used as a description of a particular type of argumentative fallacy: namely, an ad hoc justification for an unreasoned and/or unjustified assertion or generalisation. Yet why “No True Scotsman,” rather than – say – “No True Englishman,” or “No True American”?

The phrase is generally traced back to the work of English philosopher Antony Flew:

Imagine some Scottish chauvinist settled down one Sunday morning with his customary copy of The News of the World. He reads the story under the headline, ‘Sidcup Sex Maniac Strikes Again’. Our reader is, as he confidently expected, agreeably shocked: ‘No Scot would do such a thing!’ Yet the very next Sunday he finds in that same favourite source a report of the even more scandalous on-goings of Mr Angus MacSporran in Aberdeen. This clearly constitutes a counter example, which definitively falsifies the universal proposition originally put forward. (‘Falsifies’ here is, of course, simply the opposite of ‘verifies’; and it therefore means ‘shows to be false’.) Allowing that this is indeed such a counter example, he ought to withdraw; retreating perhaps to a rather weaker claim about most or some. But even an imaginary Scot is, like the rest of us, human; and we none of us always do what we ought to do. So what in fact he says is : ‘No true Scotsman would do such a thing!’
– “Evasion and Falsification,” Thinking Straight

Imagine Hamish McDonald, a Scotsman, sitting down with his Glasgow Morning Herald and seeing an article about how the “Brighton Sex Maniac Strikes Again”. Hamish is shocked and declares that “No Scotsman would do such a thing”. The next day he sits down to read his Glasgow Morning Herald again; and, this time, finds an article about an Aberdeen man whose brutal actions make the Brighton sex maniac seem almost gentlemanly. This fact shows that Hamish was wrong in his opinion, but is he going to admit this? Not likely. This time he says: “No true Scotsman would do such a thing”
– Thinking About Thinking: Do I Really Want To Be Right?

It is interesting that the learned Mr Flew chose a Scotsman to illustrate a chauvinist fallacy, given the history of Scottish stereotypes in 20th Century discourse – we’ll tactfully ignore the woeful choice of name for the the Aberdonian terror – and especially given his exploration of the Scottish Enlightenment.

Given the phrase is meant to illustrate a fallacy, it’s natural that variations would put the hypothetical Scot in a poor light:

Smith: All Scotsmen are loyal and brave.
Jones: But McDougal over there is a Scotsman, and he was arrested by his commanding officer for running from the enemy.
Smith: Well, if that’s right, it just shows that McDougal wasn’t a TRUE Scotsman.
– Internet Encyclopedia of Philosophy

Example: Angus declares that Scotsmen do not put sugar on their porridge, to which Lachlan points out that he is a Scotsman and puts sugar on his porridge. Furious, like a true Scot, Angus yells that no true Scotsman sugars his porridge.
– Your Logical Fallacy Is…

You get the idea: they all rely on Scottish archetypes to illustrate the silliness of trying to backtrack when your assertion has been utterly falsified. The idea that any one Scot can make an assertion on the people of Scotland as a whole is patently absurd. “No Scot would/could do this.” Often, chauvinism is indeed the key: because they cannot imagine themselves doing something, it is inconceivable to them that a fellow Scot could be capable of such a thing – be it a terrible thing, as in the above examples, or indeed a good thing. It wasn’t so long ago that the very idea a Scot could win at Wimbledon was fantastical, after all. 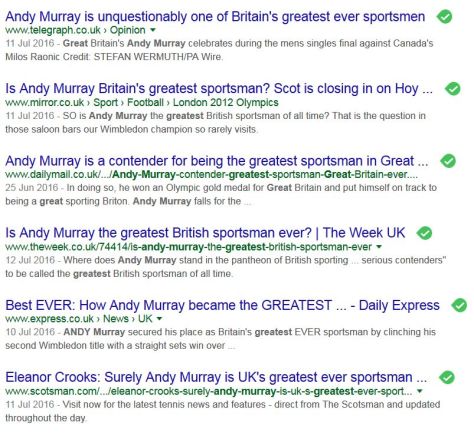 Yet the hypothetical Scot of Flew’s story is all too real: full of the Dunning-Kruger certainty about what the people of Scotland can or cannot do. You’ll see them all today, earnestly and desperately pointing to a document which was designed from the outset to undermine their country politically and economically, whose sources cannot be publicly verified and scrutinised, whose conclusions have zero relevance to a hypothetical independent Scotland. The only way we could possibly know an independent Scotland’s financial situation is if Scotland was already independent.

The trick of the No True Scotsman fallacy is the possibility that there is such a thing as an “Untrue Scotsman.” A Scotsman,* by any reasonable definition, would be someone who was either born in Scotland, or lives in Scotland. It’s a very specific, binary criteria, which is entirely based on culture & geography – not behaviour or culinary tastes. Hence the Proud Scot, who can simultaneously be proud of a country, yet fervently reject the normality enjoyed by literally hundreds of others for that same country.

So take some time, and some pity, for those crying “we cannae dae it.” Not too much, of course – but consider them all the same. They are speaking from their knowledge and experience, the belief that they cannot do it. A look at previous Scottish Executives and the woeful record of several councils says it all. But they are not the Scottish Government. They do not command the majority of MPs, the largest body of MSPs, nor the largest number of Councillors. And, whatever poll you point to, they certainly do not reflect the vast majority of the people of Scotland.

Yes, we know you cannae dae it. That’s why we’ve stopped voting your parties into government. But can you think for a moment – just a moment – that just because you can’t do it, it does not mean it cannot be done at all?

*I’m choosing to define Scotsman using the original definition of man, which was gender-neutral and only fairly recently came to apply to adult male humans: I say women and non-women alike can call themselves Scotsmen with pride!