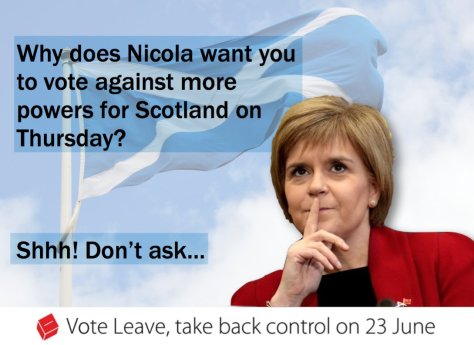 Vote Leave’s latest adventure is to pretend that Nicola Sturgeon – again with the personalisation – doesn’t want more powers devolved to Scotland. A very curious tack from the same people who regularly voted against devolving powers to Scotland as part of the UK Government. Take Michael Gove, for instance:

When asked how many people would be allowed to come to Scotland if the UK leaves the EU, Mr Gove said: “It would be for Scotland to decide.

“Because, under any proposals we put forward we believe that a points-based immigration policy, similar to the one that was actually put forward as a model for an independent Scotland by Nicola Sturgeon, would be the right approach.”

He acknowledged that the Home Office currently sets immigration policy for the whole of the UK, but said “one of the advantages of moving outside the EU is that we would be able, as a United Kingdom, to have control over immigration policy”.

He added: “Holyrood would be strengthened if we left the EU.

“The Scottish Parliament would have new powers over fishing, agriculture, over some social areas and potentially over immigration.”

So let me get this straight: Mr Gove is asking the people of Scotland to believe that it is the EU which is stopping Scotland from having “new powers” over fishing, agriculture, some social areas and “potentially” immigration. If that’s the case, then why did Mr Gove vote against an amendment to devolve everything except the constitution, foreign affairs, public service, defence and treason to the Scottish Parliament? If Mr Gove is so interested in granting more powers to the Scottish Parliament, why has he voted against every SNP amendment he was present to debate? Indeed, if it’s the EU which has all these powers over Scotland, then why did we bother having votes to devolve them at all?

Do they think we’ve learned nothing?

With the best will and respect in the world to those Scottish nationalists who also want out of the EU, I despair of anyone who advocates a leave vote in the upcoming referendum on the grounds that it would bring more power to the people of Scotland. All the evidence suggests the contrary.

On the face of it, it seems reasonable. But, like all the Truthiness of the Leave Campaign, it’s false.

Under section 29 of the Scotland Act, Holyrood’s legislation must comply with EU law. That’s why, for example, the Scottish Government’s minimum alcohol policy could be challenged. Whisky manufacturers argue that it represents an unjustifiable interference in Europe’s common market in liquor, indirectly discriminating against European companies, able to sluice out wine on the cheap. The case continues.

But that’s not the only thing which limits Holyrood’s powers in fields dominated by pan-European regulation.  The Scotland Act doesn’t list all the issues which the Scottish Parliament has control over. Instead, the legislation knocks that logic on its head. It lists only those topics which Holyrood can’t legislate about. You find all this in Schedule 5. We call these “reserved matters” – and if you take a look at them, you’ll see that in most of the areas identified by Professor Scott, there would be limited or no “automatic” strengthening of Holyrood at all, even if EU law was disapplied.

Take the issue of fishing, for example — a hot button. Under C6 of Schedule 5, the “regulation of sea fishing outside the Scottish zone (except in relation to Scottish fishing boats)” is a reserved matter.  It will remain so unless and until Westminster removes this restriction. The same goes for many other areas of policy. With some limited exceptions, for example, equal opportunities remains reserved, despite agitation for its devolution in the last Scotland Bill. Head H reserves employment law to Westminster, including the minimum wage, trade union legislation, the Employment Rights Act, and so on. MPs decided that these should continue to be decided by MPs — despite calls for their devolution as recently as last year.

Professor Scott’s point is more convincing when it comes to agriculture and environmental policy — neither of which feature prominently in the list of reserved matters. But competency without cash is a paper power. Will future UK governments match the agricultural subsidies which the EU Common Agricultural Policy has used to support the industry of our farmers? Will an austerity government become big rural spenders? Who knows?

The idea that you can  – in a trice – “automatically” empower Holyrood across all these categories of governmental policy by leaving the EU is a naive fantasy. And that, before we get into the regulatory harmonisation which might be necessary if a weakened Brexit Britain is to cut the sort of trade deals with the rest of the bloc.  Your guess is as good as mine about what the majority in Westminster would during during a post-Brexit interregnum.  I don’t know about you, but as a Scots lawyer, concerned with the powers of devolved parliaments and assemblies, I don’t find the idea of “restoring” Westminster sovereignty over these fields terrifically reassuring. It is the usual grisly rhetorical prelude, anticipating bitter medicine. Pass the catheter.

The SNP put forward a motion, just to clear up any ambiguity, over the Scottish Parliament at least having the right to consent over legislation that affects devolved matters. It was voted down. Because of course it was. But we’re to expect the same people who gleefully marched in to deny the parties voted in by the majority of Scots from even the most meagre of powers would suddenly allow the Scottish Parliament control over something as profound as migration?

All this vote is about is who would have control over certain aspects of Scottish life – the EU, or the UK. We’re not being asked whether Scotland should leave or remain in the EU, because the truth is that as long as we are part of the UK, we will have no choice in the matter at all. If the UK votes to remain, then Scotland remains; if the UK votes to leave, then Scotland leaves. Only 60% of English voters have to vote Leave, and every single Scottish, Welsh, and Northern Irish votes would be irrelevant – and 52% of English, Welsh and Northern Irish voters voting Leave would override even a two-to-one vote in favour of Remain by Scots. The only way Scotland could affect the vote is in an already close contest – in which case, we would merely be the deciding vote out of tens of millions.

Besides, any outrage about the Scottish people “usurping the will of the English people” was just dismissed by Outer Liam Fox on the BBC debate, who reiterated that the people of the UK were making this vote as One Nation.

A favoured quip by the likes of Nigel Farage is that the SNP are not “really” offering independence at all, but “just swapping Westminster for Brussels.” It echoes a common sentiment – that the independence referendum was a vote between Westminster and Holyrood. It’s a question where the majority of Scots seem to favour the latter over the former, even if they seem to stop just short of calling it independence. Yet the 23rd of June isn’t offering anything like independence to the people of Scotland at all – merely over whether Westminster should have even more power than it does now, or whether it should continue to share its power with Brussels.

All these things are happening right now, as the UK is part of the EU. In the event the UK leaves the EU, what could possibly give you the impression that the UK government would entertain recompense for what the Scottish people lose from EU membership? Just this year, the UK government attempted to claw £7 billion of the Scottish budget as a “trade” for a meagre pittance of the powers they promised in the event of a No vote. Do you really think they will be any different when unfettered by EU regulations and responsibilities?

All the goodies the Leave campaign are promising – money, power, control, influence, freedom – they aren’t going to share it. They’re going to clutch it tightly to their chests and never let it go. They won’t allow the people of Scotland any say in their future – otherwise they already would have done so. They won’t devolve anything willingly to the Scottish Parliament without trying to extract a heavy price. They only want our votes to empower them and their interests – not us and ours.

The only thing being offered to the people of Scotland in this referendum is the chance to either ensure our allies in Europe continue being a tempering force to the excesses of British imperialism, or to allow the far-right extremists in the Other Party, the UK Government Party, and their tallywags in the True Brit Party to triumph. In spite of the bad deals, the red tape, and the horrendous treatment of Greece, the EU have been far better friends to the people of Scotland in 40 years than the UK Government has in 300: fishing quotas and tender processes are as nothing compared to suppression of wealth, siphoning of funds, social engineering, deliberate impoverishment, and destruction of lives by the people purporting to have our interests at heart.

3 thoughts on “The Betrayal of Control: Return of Jam Tomorrow”