(Apologies for the lack of updates: things have been moving very swiftly since the conference, and I’ve been extremely busy on some very important – and cool – matters. All will become clear in the weeks to come) 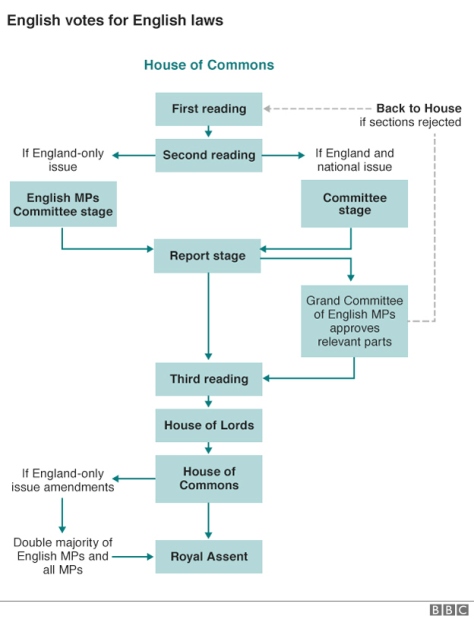 The UK Parliament is fraught with inefficiency, corruption and inadequacy. But as they say, things can always be worse. And now, the UK Parliament is indeed a worse place than it was the day before – as it has passed a change to standing orders which means that some members of the UK Parliament could be explicitly prevented from participation in some UK votes.

The best explanation I’ve found for the actual legislation of EVEL came courtesy of the ever dependable Lallans Peat Worrier, for the very reason that even though he urges independence supporters to exercise no small morsel of restraint regarding the development, he still notes that this is a concrete example of Scottish, Welsh, and Northern Irish MPs being excluded from certain votes (bolded for emphasis):

Say Nicky Morgan proposes to hike tuition fees to £20,000 per annum south of the border. She brings forward subordinate legislation to give effect to this policy. John Bercow gives it the nod: this is an England only matter. The House divides, twice. First, the English MPs vote on the policy. They are in favour. Scottish MPs are excluded at this stage. The proposal passes by a majority of 44.

Next, EVEL envisages that every MP, wherever they come from, whichever constituency returned them, will take the final decision. At this stage, say the government is defeated by one vote. What happens? The will of the whole-UK majority prevails. Fizzing, perhaps disgruntled, perhaps increasingly resentful, the English Commons majority will have to lump it. Tommy will have his say. All he is prevented from doing is participating in the English veto vote. If he can strong-arm, cajole and persuade enough Tories to rebel – he can still prevail. No fees hike.

You can argue on how important it is that Scottish (and Welsh and Northern Irish, don’t forget) MPs are prevented from participation in a vote in the context of whether it changes anything – if they are permitted to vote in the final stage, then their voice is being heard at some point in the bill. But there is a binary here that, until now, has never been broken: either every MP can participate in a UK vote put to the UK parliament, or not every MP can. One of the last, lonely bastions of democracy and equality in a teratomous parliament has been struck.

Wee Ginger Dug is lucid as ever in pointing out certain media’s seeming disinterest in this constitutional earthquake. Iain McWhirter notes that this isn’t simply a Scotland/England issue, but a Conservative/New Labour one too. Wings Over Scotland comments that it is practically impossible to justify any representative of a Scottish, Welsh, or Northern Irish constituency from ever holding major office in a UK government ever again. A particularly excellent comment on that page comes from Doug Daniel:

It also means that there can never be a UK government that doesn’t have a majority in England. Imagine Labour somehow managing to win back Scotland, gaining a slim UK majority thanks to 50-60 Scottish and Welsh MPs, only for every single bill on “English-only” matters to be vetoed because the Tories have more English MPs. It would be ludicrous. The same would be true if we’d had the result many folk expected in May – a Labour minority backed up by the SNP when required.

So, to recap: EVEL excludes Scottish, Northern Irish, and sometimes Welsh MPs from participating in a voting stage which is deemed “English-only.” But for some unfathomable reason, there is no equivalent SVSL/WVWL/NIVNIL proposition which would ensure, for example, that some votes can be considered “Scottish-only” – such as the Scotland Bill, or those powers which are not currently devolved to the Scottish parliament – and thus, there is no situation in which English (or Welsh or Northern Irish) MPs can be prevented on voting on equivalent “Scottish-only” issues, even on the genteel committee proposals of EVEL. And, as has been proven time and time again, English (and Welsh and Northern Irish) MPs have shown absolutely zero reluctance when it comes to voting on what I think any reasonable individual would consider “Scottish-only” issues. Even Scotland itself. 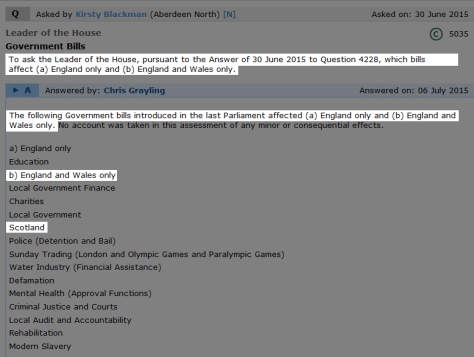 But then, we clearly aren’t dealing with reasonable individuals, are we? 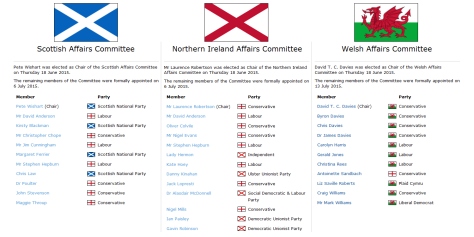 No idea. Certainly none of the “English Affairs” Committees seem to suffer from such problems. Local government is largely devolved to Scotland, but there’s only the one Scottish member present on the Communities and Local Government Committee. The same goes for Committees that have significant impact on reserved issues. The Justice Select Committee has 1 Scottish and 2 Welsh members out of 11. The Culture, Media and Sport Committee has 1 each from Scotland and Wales of 11 to represent the culture and media of those nations. Not a single one of the 19 England-only, England-and-Wales-only, or UK-wide committees has anything other than a majority of MPs representing English constituencies – yet the same cannot be said for the committees for Scotland or Northern Ireland. And most damning of all, it is unclear whether representatives of Scottish/Welsh/Northern Irish constituencies can even take part in those committees, as Tommy Sheppard has intimated.

This is ludicrous for another obvious factor: Scottish votes alone cannot overturn the democratic will of English votes. Even Scottish, Welsh, and Northern Irish votes combined cannot do that. All they can do is decide tight contests where significant numbers of English MPs support both sides. Case in point: relaxing the foxhunting rules. A huge number of English MPs do not support changing the law at all, even if the Conservative majority in England support it. Yet even the mere thought that Scottish (and Welsh and Northern Irish) MPs would dare involve themselves is treated as a democratic outrage, as if the changes in law would be met with joyous rapture and zero opposition from other English people. No such acknowledgement when 18 of 20 amendments that were supported by the majority of Scottish MPs were shut down by English, Welsh and Northern Irish votes.

They’re both unfair, but to very different degrees of severity – and EVEL doesn’t solve it at all, because despite the rantings of far-right idealogues, this will not give the people of England the voice they clearly want. If anything, it could muzzle it further. 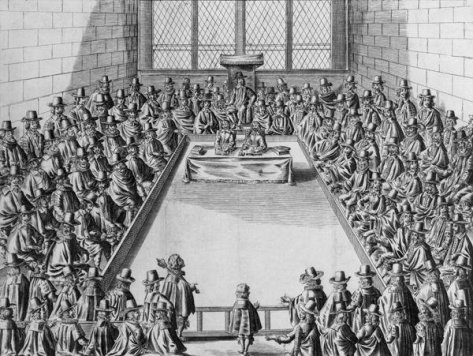 But, of course, the forces of EVEL aren’t actually interested in giving the people of England greater power and influence over their own lives in the devolution of power from the UK Parliament. This is part of a Conservative campaign to strengthen and increase their influence – or, more accurately, to weaken and decrease their opponents’ influence. Why else would they disenfranchise every member of the European Union who is not a UK citizen in a referendum which irrefutably affects them most of all? Why else do they still refuse to lower the voting age to parity with Scotland, Jersey, Guernsey, the Isle of Man? Why else would they seek to disenfranchise tens of thousands from the poorest areas of the UK? Instead of trying to increase their support the old fashioned democratic way – by, you know, persuading more people to vote for them – they’re doing it artificially by cutting away support for the opposition.

Not that they aren’t doing anything to increase their power through addition – clearly unhappy with their majority of 12 (technically 15 if you exclude Sinn Féin and the speaker), and the temerity of the Lords threatening to block the Tax Credits cut, they’ve surmised another 150 unelected Tory peers ought to do the trick. Hence, a wafer-thin majority government with 36.9% of the vote – the second lowest vote share of a majority UK government in history – is a lot less secure than having 330 seats of 650 may suggest. What are they so afraid of?

You might wonder why some independence supporters are outraged at this: after all, does it not suggest a possible “trigger,” a “material change in circumstances” that could lead to indyref2? Therefore, should we not be rubbing our hands with glee that the Tories are making such a monumental strategic blunder? Well, if you think Scottish independence supporters are motivated by sheer fanatical devotion to the idea and nothing else, sure. But the desire, the belief, the cause, is much more complex than “independence at all costs.” What else do you think is stopping the Scottish government just declaring UDI right now, or even when they gained a majority in Holyrood in 2011 – the costs could be absolutely immense, but we’d still be independent, right?

That’s why we haven’t had stories of independence supporters plotting to make good on Guy Fawkes’ plans, or remove David Cameron from office the way John F. Kennedy was, or undertake any other acts of such senseless, reckless and counter-productive violence. The independence supporters I know are advocates of democracy. They look to the anachronism that is Westminster and the feudalism of the House of Lords and want no part in it. Democracy is about the people deciding their own future. That is what drives the cause of Scottish independence for me, and for many of my fellow independence supporters. And if an injustice is done against any democracy, then everyone is the poorer for it.

Disenfranchisement is the ultimate crime against democracy, whether it’s the public or their elected representatives.

5 thoughts on “The EVEL That Men Do”