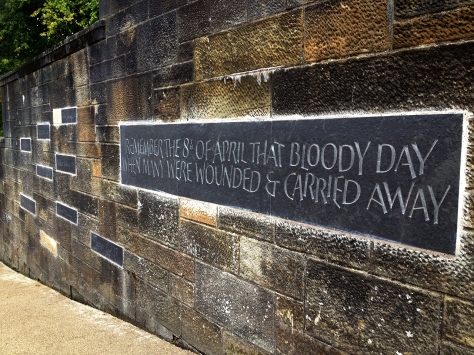 In April 1820, two men named John Baird and Andrew Hardie stood upon a gallows waiting to be executed in front of gathered crowd in Stirling. Andrew Hardie was asked by town Sheriff for his last words. Hardie addressed the crowd before him,

My suffering countrymen! I remain under the firm conviction I die a martyr in the cause of Truth and Justice, and in the Hope that you will soon succeed in the cause which I took up arms to defend.

The two men stood close to each other whilst the ropes were fastened across their necks. They prayed passionately, and Hardie held a handkerchief. The trap was sprung from their feet at 11 minutes to 3 in the afternoon, and approximately one minute later the handkerchief held by Hardie dropped to the ground. This event marked the end of an extraordinary episode in Scottish history named the Radical War.

Sections of Scottish Society were very much inspired by the seismic political events unfolding in the late 18th century; the Revolutionary War in America, the Irish Rebellion of 1798, and the French Revolution.

Thomas Muir who, at the age of 26, led a movement demanding the vote for the ordinary men of Scotland. His campaign against corruption in politics and society touched every town and village in the country and his fame soon spread to England and Ireland. The great but short-lived political reform movement of the 1790s catapulted the son of a Glasgow grocer to international prominence.

His nemesis was Henry Dundas, home secretary and powerful political manager of all of Scotland, who controlled the country with a cocktail of patronage and nepotism. Dundas had Muir arrested on a trumped-up charge of sedition and his trial caused public and parliamentary outrage. A picked and packed jury convicted Muir and a complaisant and obligated bench of judges sentenced him, quite unlawfully, to 14 years transportation in the newly established penal colony of Botany Bay.

This was an incredibly tense social and political climate in which the state could force particularly extreme measures upon perceived radical elements within society. Local civic authorities provoked a state of oppression and fear.

Yet the desire for political change did not die. The end of more than 20 years of war with France in 1815 brought great distress in its wake. In Scotland, there was widespread unemployment as war demand fell away, and demobilised soldiers returned home in their droves. Food prices rose sharply in 1816 and tradesmen and workers suffered. The abolition of the income tax, in response to middle class pressure, meant that essentials – clothes, food, soap and candles – were made to carry the burden.

In this context, economic distress became politicised. Radicalism was the vocabulary of the politically excluded; an expression for like-minded people to attribute the social and economic woes of the time. The immediate years after 1815 witnessed radicalism develop from a language of exclusion to a political ideology.

Mass meetings and demonstrations in the west of Scotland became frequent. The King’s birthday in 1818 was celebrated in Glasgow with a riot. In June 1819, a meeting of weavers demanding action for relief of distress was held on Glasgow Green. In the aftermath of Peterloo in Manchester, there were riots in Paisley after constables tried to seize the banners at a meeting of up to 18,000 people. Radical reformers were reputedly drilling, demanding annual parliaments, universal suffrage and vote by ballot.

On the 23d November 1819 the Government passed the repressive legislation known as the Six Acts. The Acts ultimately made any meeting attended by over 50 people as an act of Treason. The increasingly hostile environment that was created led to ‘a state of open war…between working class communities and the authorities.’

Small underground groups were organising in the west of Scotland with the view of a violent overthrow of the Government. The rebellion came in the week beginning 2 April with the issuing of the declaration announcing the establishment of a Provisional Government of Scotland.  The uprising was largely confined to a number of small weavers villages around Glasgow, though up to 60,000 people across the west of Scotland struck work. Yet the authorities had been expecting this for some time, and were well-prepared. Large numbers of troops were deployed in areas like Paisley and Glasgow.

There was an expectation that similar uprisings would take place in the North of England, and the Glasgow radicals waited in vain for the signal – which was the mail coach from Manchester failing to arrive. When that failed to happen, a group of 30 radicals marched from Glasgow to Falkirk to seize the Carron Iron Works to obtain guns. It ended in a bloody skirmish with the authorities at Bonnymuir.

In a separate rising, a group of Radicals from Strathaven, led by James Wilson, marched towards Glasgow in the belief that they would join the radical army. With confusion, around 80 men set off to find no radical army and no uprising.

There was little leadership or planning. The assumption was that the first sign of movement in Glasgow would trigger risings all over the country. Yet the authorities completely nullified the threat.

The final act of rebellion occurred at Greenock

Upon the arrest of radical prisoners around Paisley and Johnston several were taken to Paisley jail, a small and cramped confinement in the old Tolbooth tower. However due to an overflow of prisoners 5 men in total still needed to be detained in cells whilst they awaited trial. The Volunteers of Port Glasgow Militia were requested to transport the remaining 5 prisoners from Paisley to Greenock Jail in Bank Street the morning of April 8th, 1820.

As they marched into the town with drums and fifes, all the shops on the main road were shut, as people lined both sides of the road from the Rue End to Cathcart Street. The Militia managed to secure the prisoners in the jail. Yet the mob had now become increasingly hostile towards the volunteers, with rocks and other missiles being thrown. As the militia walked towards the Rue-End, they fired their muskets in the hope of dispersing some of the large gathering of people. Greenock locals were furiously attempting to wrestle muskets from the volunteers and in the event some shots were fired low, injuring some in the process. The compressed nature of the streets and the close-knit proximity of the crowd meant the shots were ultimately fateful for many innocent bystanders, and the military volunteers were becoming increasingly brutal. 18 people in total were shot, and eight were killed. Many had a lucky escape. The evidence from the surrounding buildings show that dozens of more shots were fired. No less than seven bullets came through the windows of a pub in Cathcart Street.

As night fell an incensed crowd gathered again in Cathcart Square and began to bring down the wooden gates of the jail. The policemen who attempted to protect the gates were showered with bricks and missiles in the courtyard and in the end eventually retreated. The gates came crashing down and the crowd stormed the jail, releasing the five radicals from their cells.

The aftermath was a series of treason trials. Altogether 88 people were indicted for treason. At Stirling, Andrew Hardie and John Baird were found guilty and sentenced to death. In Glasgow, James Wilson suffered the same fate. However at Dumbarton, the prosecution decided not to proceed against a group of radicals. At Paisley, the jury refused to convict. In the end, only three men were executed. Another 16 were sent to Australia.

Economic distress and the sense that there was no alternative way to improvement had pushed many workers into political action. Yet for the rest of the next two decades, political reform movements became essentially middle class and evolutionary rather than revolutionary.

Perhaps the Radicals of 1820 did not, in fact, lead, or win, or bring about any specific change but simply pointed in the direction of travel. We should not focus on what they may or may not have achieved but what they aspired towards. They aspired to be a voice of hope, with a clear vision of what could and should be attained.

The actions of these individuals don’t merely assist us in realising the dreams and goals of the Radicals – they allow us to realise our own dreams – no matter how distant they may seem now with our dearest efforts, they can and will be realised. 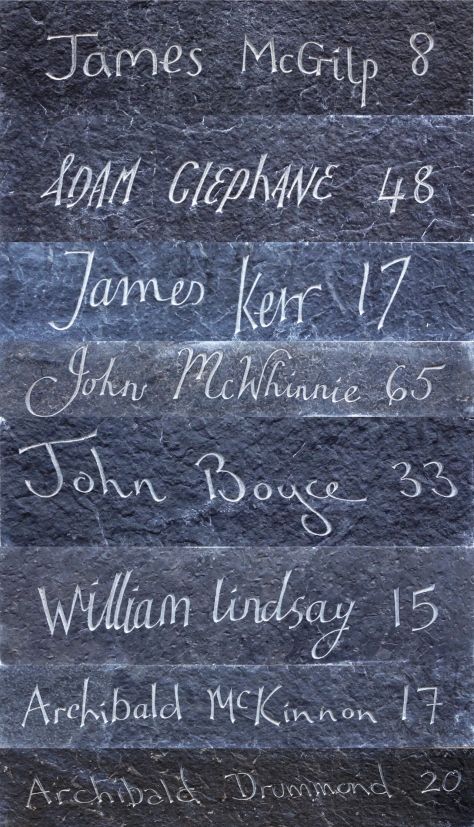 (This was a guest post based upon a speech by Shaun Kavanagh, Inverclyde historian, tireless researcher, and good friend. The photographs included throughout this post were taken by myself at the long overdue memorial unveiling for this incredible event in Greenock’s history. The struggle for democracy is history that belongs to all of us, regardless of religion, ethnicity, politics or anything else, and I was proud to see so many people from across all the spectrum of society coming together to commemorate Greenock’s own radical martyrs.)

3 thoughts on “Faithful to Freedom Through a Time of Storms: Guest Post by Shaun Kavanagh”