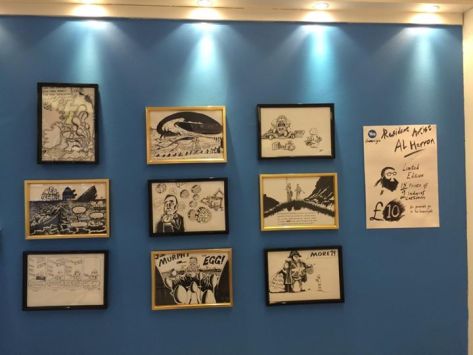 I drew pictures during the referendum campaign. Political cartoons lampooning the arguments, figures, and ideas of the time. It was fun, but cathartic. In hyperbole, I felt I could imbue my feelings on independence and the UK in a medium that fit the grotesquery and raw emotions.

I drew a picture on the 19th of September, 2014. I never shared it with anyone. Not my family, my friends, my brothers and sisters in the Yes campaign. It was grim, gory, dark and cruel. I couldn’t face the world. I felt like an entire nation was dead. Murdered.

I remember the count, in the early hours of the 19th of September, 2014. We Yes campaigners were excited, optimistic and cheerful, if our nerves were fairly wracked. The No campaigners, on the other hand, were sweating bullets: to go from a safe No to borderline – indeed, only 86 votes made the difference to the official count in the end – was a damning indictment of what was a Labour stronghold for the better part of a century. I remember the relieved cheers from the New Labour councillors and activists,their “No Thanks” rosettes proudly affixed to their lapels. As they pumped their fists into the air, I heard their chant:

I couldn’t understand why they were so jubilant: didn’t they realise they had lost too?

List of countries that have gained independence from the United Kingdom

Look at this page. Look at all these nations, proudly asserting their nationhood, bravely leaping into the unknown to take command of their own destiny.

It doesn’t matter that the No campaign lost a 20-point lead despite having the support of the mainstream media, the three largest UK parties, big business, and scores of celebrities. It doesn’t matter that the head of the No campaign was calling 60/40 a “close” result. It wouldn’t even matter if Scotland votes for independence in a second referendum: according to the history books, Scotland was the only nation to ever vote against its own independence.

Don’t give me any nonsense about British colonies like the Falklands or Bermuda, or French states like Quebec. Scotland was an independent nation for almost a thousand years before the Act of Union. The Falklands and Bermuda were not nations, let alone independent.

Even if Scotland does vote for independence in the future, that first No vote will haunt our nation’s history. Nothing can undo that.* Do you truly think our grandchildren will look back in 100 years and view that decision to surrender their sovereignty with anything but contempt? Do the people of India lament that the Indian Liberal Party had it right all along? Are the citizens of the United States pining for the days of the Loyalists? Would the independent republics of South America crawl back to France, Spain or Portugal now?

You can call yourselves Proud Scots all you like. You can shout your acclaim of Scotland all you like. When it came to the crunch, you voted against Scotland taking command of its own destiny, in favour of allowing the United Kingdom to do so instead. I don’t particularly care how “proud” you think you are in giving away the sovereignty of your nation out of fear, or uncertainty, or even love of the Union. Your actions are what matter. And your actions speak for themselves, regardless of the “pride” you profess to feel for Scotland and its people.

I remember the count in the early hours of the 8th of May, 2015. I remember seeing New Labour councillors, activists and counting agents filing into the Waterfront. The atmosphere was not dissimilar to the referendum – at first. Then the mood started to change. The samples came in. We all went around, watching the count, some of us taking tallies. Every single polling station had the SNP either in a close contest, or outright winning. Gourock? SNP. Wemyss Bay? SNP. Greenock East End? SNP.

It’s been a year. The official result was 45/55. A year later, we have 56 MPs out of 59, 110,000+ members, over 50% of the vote, and look to sweep Holyrood’s constituency in 2016. Independence is now being called inevitable by people who oppose it. And yet, little could shake my frustration with those New Labour voters who cheered and roared their acclaim of the union last September, yet stood crestfallen – devastated, even – at the results in May. I couldn’t understand why they were so despondent: didn’t they realise they had won too?

In a way, John McTernan was right. As long as Scotland remains part of the UK, New Labour are still the winners. I feel zero sympathy for the MPs who lost their seats, the activists who chapped doors as much as we did, the voters who still believed in New Labour and the Liberal Democrats: we are still in the UK. You are still victorious. Everything the SNP want to do is hampered by the weight of New Labour and Conservative MPs of England – that’s your Better Together right there. Even when you demand the SNP mitigate the harm of the Bedroom Tax. Even when you plead for the SNP to do something you fought to prevent them from being able to do. Even when all they propose is what you used to propose, back when you had some semblance of morals.

Scotland died on the 19th of September, 2014. But in the hours, days, weeks, months, and now year following, Scotland was reborn. Nations die and are reborn according to the will and actions of the people.

As I pondered last year: the rest of Scotland’s history has only just begun.

*Well, nothing, apart from proving that the referendum was indeed rigged. You can see the emotional appeal in such a notion, where even the subversion of the democratic process is preferable to believing 2 million people really would prefer to give up their sovereignty to a government that treats them with contempt and negligence.

12 thoughts on “Death of a Nation”