I’m fully aware that, as a supporter of Scottish independence, some may well suspect I treat anything with the word “Britain” in the title with the utmost scepticism, if not outright antipathy. As a grievance-obsessed nat, you might imagine my cognitive dissonance when I watched ITV’s Dinosaur Britain. I love dinosaurs! But I apparently hate Britain! How to reconcile one of my great loves with one of my apparent hates?

Well, Dinosaur Britain is a perfect example of the sort of unconscious bias which has motivated many in the Scottish independence movement to question their own cultural priorities. It’s a documentary about dinosaurs, for goodness’ sake – how could it possibly be part of the British Establishment Bias?

Dinosaur Britain was a strange little documentary. It seemed to want to have the same thrill and fun of “dinosaurs in modern times” as Prehistoric Park and Primeval, while also adding a fair amount of educational material. After the host – Ellie Harrison, whose occasional squeals of delight belie her enthusiasm – discussed one dinosaur or another, that creature would then magically appear, prompting a Jurassic Park-esque scene starting with “ooh, aah,” then running and screaming. Baryonyx stalks the Thames; Megalosaurus terrorises Oxford; Iguanodon roams Crystal Palace. The documentary can’t really decide how seriously to take these interludes, as we have some scenes with people fleeing in terror, and others where they don’t seem to notice the multi-ton prehistoric displacements at all. After running from the rampaging Megalosaurus, the hosts simply segue into another topic, as if they didn’t just escape certain death at the hands of a dinosaur. What happened to the carnivores after the vignette ended: did they get the police? Animal control? The TA?

Forget the Doctor, we need Quatermass!

Nonetheless, the “people with dinosaurs” stuff is a clever way to contextualise scale to those with no frame of reference, as well as comparing speed and behaviour with other animals. What’s more troublesome is when scientific shorthand can be misleading to the lay person. Sure, most palaeontologist would know that “the first dinosaur ever discovered” would actually mean “the first dinosaur described to the scientific community,” but would someone not deeply immersed in the history of dinosaur discovery? Dinosaur remains were discovered long before Buckland’s formal description of Megalosaurus – even Megalosaurus itself was known to the scientific community through its bones for over a century.

Aside from the language, one of the more unfortunate omissions in the program is that of non-dinosaur discoveries: not only the first scientifically described dinosaurs, but the first ichthyosaurs and plesiosaurs to be described – both of which were actually featured in the program – were British finds. In particular, a word or two about Lyme Regis’ own Mary Anning, who discovered both (as well as the first pterosaur outside Maastricht), would have been highly appreciated in promoting the contributions of women to the study of prehistory.

Now, what about the bias? (Bail out now!)

Well, there is a bias – but it’s more nuanced than an outright “Britain is England, plus three” impression. The first program goes to several locations: visiting the Natural History Museum in London, Oxford, Stonehenge, the Jurassic Coast, Bristol museum, and featuring discoveries from Surrey, Oxfordshire, Dorset, and Devonshire. The
second episode visits Loch Ness, Edinburgh, the Staffin Museum, the Dinosaur Centre, back to the Natural History Museum, and the National Museum of Wales, and features finds from Skye, Wight, Gloucestershire, and Lavernock.

Notice anything about Dinosaur Britain’s journey? 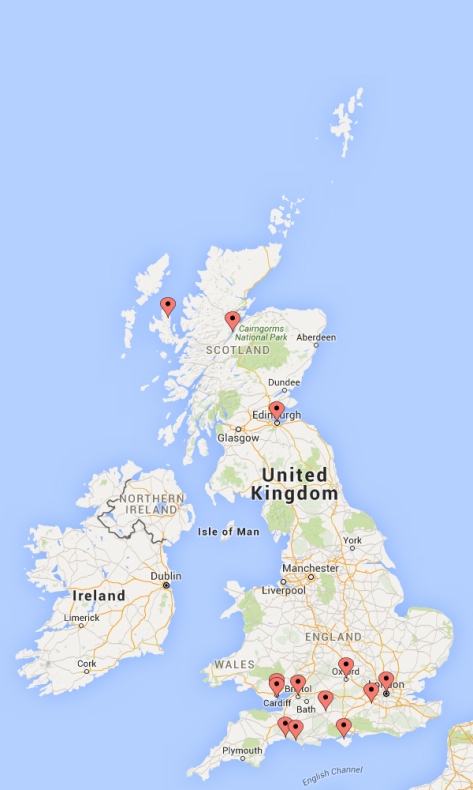 The program does point out that many of the most important and famous dinosaur discoveries were indeed made in the general southwest region, and justifies it by noting in the second episode that most of the rock in Scotland was significantly older, which led scientists to consider Scotland “a lost cause” when it came to dinosaurs. Yet looking at a geological map of the British isles, you notice a few things:

There’s Triassic in clusters even to Carlisle, a huge swathe of Jurassic going all the way to Middlesborough, and Cretaceous up to Scarborough. Dinosaur remains have been found in Yorkshire, Whitby, Scunthorpe, Much Wenlock, even up in Sunderland. While sites in the north of Scotland like Helmsdale, Brora, Eathie, Kintradwell, Golspie, Portgower, Balintore, Lothbeg, and Crakaig are known primarily from marine Jurassic life, the same was said for Skye until quite recently. Poor old Northern Ireland doesn’t get a look in edgeways. Nonetheless, Scottish and Welsh creatures did get some time for themselves… sort of. The segment spent on the Isle of Skye lasted 10 minutes; Cardiff National Museum had 4 minutes. The other 80+ minutes were spent on dinosaurs of Southwest England.

Why so little on Scotland and Wales? Why nothing for Northern England? Well, it’s the same auld sang – there are more discoveries in the south of England for the same reason there are more of just about everything in the south of England. Oxford, Cambridge, and London were the centre of the British scientific community for centuries, the area is more developed and populated (revealing more fossil-exposing strata), so of course the immediate surroundings would be explored and studied most closely. The same can be said for Scotland: many of Scotland’s earliest and most famous palaeontological discoveries aren’t too far away from the Central Belt. It’s just a shame Scotland’s contributions didn’t include dinosaurs until recently.

Damn and blast your eyes INDEED

But to be fair, Scotland and Wales are mentioned more frequently than England as a country: it is Dinosaur Britain, and you can hardly move from all the references to This Sceptred Isle: Union Flags waving, London buses trundling, Houses of Parliament and Big Ben in several shots, a chap dressed in a Union Flag suit at one point… Sure, certain locations and features are different, like the Jurassic Coast being a seabed and Loch Ness not existing in dinosaur times, but the impression is that Britain itself endured throughout the eons, whole and indivisible.

The reality is that the border between Scotland and England is a lot older than humanity:

Isn’t that interesting? It isn’t quite precise, of course, but it’s interesting how even before there were pesky humans and nations and civics, there was a distinction between the northern and southern realms of Britain. But on a more unionist note, that just means Scotland and England also came together long before pesky humans and nations and civics, so it’s all good, isn’t it?

More notable is that what is now Britain has been underwater and part of a larger landmass, too. Just prior to the Age of Dinosaurs in the Late Permian 250 million years ago, Scotland was literally separate from England; 225 MYA, the waters receded, and all the British Isles were part of the great Laurasian plate; 200 MYA, Scotland & Northern England, East Anglie, Wales, Ireland and the Hebrides all broke up into a series of islands; 150 MYA, the islands started to shrink as the water rose; 125 MYA, all the British islands joined up with Western France, Northern Germany, the Low Countries, and the Czech Republic into a Western Europe Super-Island; 100 MYA, the Super-Island split, with Western France taking Cornwall; close to the end of the Age of Dinosaurs 75 MYA, and most of England has drowned, with only Scotland, Western Ireland, and slivers of Wales and Cornwall remaining.

Quite an adventure, eh?

Ultimately, I enjoyed Dinosaur Britain: if anything, I think it could have done with a few more episodes. There are so many more fascinating discoveries that didn’t get a mention: Camelotia, a dinosaur so British it’s named after Camelot; Eotyrannus, one of the earliest Tyrannosaurids before the Coelurosaur-Tyrannosaur revolution; Juratyrant, a larger and nastier Tyrannosaurus ancestor; Thecodontosaurus, a basal sauropodomorph; Eustreptospondylus, a mini-Megalosaur; Becklespinax, a beastie that nobody seems to agree on.

But perhaps the one creature I missed the most was a Scottish beastie: Saltopus.

From the beautiful The Age of Dinosaurs: A Photographic Record

You might have heard of Saltopus if you’re my age or older: for the longest time, it was famous as the first dinosaur to be discovered in Scotland. In 1910, William Taylor found a tiny piece of jaw in the Lossiemouth West & East Quarry: the Württembergian palaeontologist Friedrich von Huene named it Saltopus elginensis (“Elgin’s jumping foot”).

Finally, we Scots had a dinosaur to call our own, to stand beside the many dinosaurs discovered, described and adopted by England! Scotland’s previous claim to fame beforehand was ammonites, trilobites, graptolites, stromatolites, fish, shrimps, sharks, sea scorpions, dicynodonts, “Devil’s toenails,”  missing links, googly-eyed eels, elks, and trees – but no dinosaurs to call their own. Every country should have at least one dinosaur. Even the Cetiosaurus bones found on Skye are just a northern branch of a species discovered in England. Alas, it was not to be: Saltopus was demoted to dinosauriform – a very dinosaur-like dinosauriform, but not a dinosaur itself.

Isn’t that just bloody typical? Scotland finds a dinosaur, and it gets reclassified. Still, there’s something poetic in Scotland’s “dinosaur” being a creature that’s nearly there, but not yet. Scotland has a few such beasties: West Lothian’s Westlothiana lizziae, affectionately called “Lizzy,” is almost a reptile, but not quite; Gilmerton’s Crassigyrinus scotiae has qualities of the tetrapod, but also of the fish. And we do have our own ichthyosaur in Dearcmhara shawcrossi –  and it even has a Gaelic name!

Perhaps I’m being oversensitive, overthinking it. On its own, Dinosaur Britain is what it is, and the constant mentions of Britain (and twice, the even more erroneous UK), “this country,” and “British” are just clumsy rather than concerted. It’s the drip-drip-drip of Britain in everything, even documentaries about dinosaurs, which chips away – especially when the Britain being portrayed is the same corner of Britain disproportionately represented in all too much popular culture.

5 thoughts on “Prehistoric Britain and Palaeobias”